Secretary-General Ban Ki-moon was honoured today for his engagement with social media users and commitment to global dialogue by the Chinese micro-blogging platform Sina Weibo.

“We need governments, non-governmental organizations and concerned citizens to speak out about global problems – and work together for solutions. Social media networks like Sina Weibo are helping individuals to raise their voices,” Mr. Ban said in a video message delivered to the awards ceremony held in the Chinese capital of Beijing.

The annual Sina Awards recognize advances in Internet and social media. Mr. Ban received the Sina Weibo Award for Special Merit for his engagement with young people through the micro-blogging platform, on which he held a live conversation in July.

During the conversation, Mr. Ban answered questions on a wide range of global issues, including peacekeeping, youth employment and sustainable development. The event was watched live by some 20 million people and subsequently attracted some 50 million Internet users.

The event “served as an occasion to confirm the possibility of achieving world peace through mutual understanding and cooperation,” Mr. Ban said.

During the ceremony, the United Nations Weibo account was also awarded the Annual Special Award. According to the selection committee, UN Weibo ranks first in terms of popularity and influence among Weibo accounts that are managed by organizations and governments. The account is currently followed by some 3.25 million users.

Addressing the ceremony, Mr. Dujarric, who accepted the award on behalf of Mr. Ban, noted that through the Sina Weibo platform, the UN has been able to share with millions of Chinese speakers important universal messages about the world body and the better future everyone wants for themselves and their children. 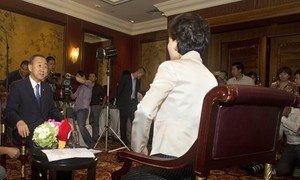 On arriving in Beijing today, Secretary-General Ban Ki-moon participated in a social media conversation with young people through the United Nations Sina Weibo blogging site on a range of issues such as peacekeeping, youth unemployment and sustainable development.