A top United Nations official today condemned the “deplorable” human rights situation in the Democratic People’s Republic of Korea (DPRK) and urged the international community to launch an inquiry into serious crimes that have been persistent in the country for decades.

“There were some initial hopes that the advent of a new leader might bring about some positive change in the human rights situation in DPRK,” said the High Commissioner for Human Rights, Navi Pillay. “But a year after Kim Jong Un became the country’s new supreme leader, we see almost no sign of improvement.”

Ms. Pillay said she was concerned that international attention focused almost exclusively on the DPRK’s nuclear programme and rocket launches, and not enough on the enforcement of human rights.

“While these, of course, are issues of enormous importance, they should not be allowed to overshadow the deplorable human rights situation in DPRK, which in one way or another affects almost the entire population and has no parallel anywhere else in the world,” she said.

Last month, Ms. Pillay met with two survivors of the country’s political prison camps, which are believed to contain more than 200,000 people. The two survivors described the harsh conditions prisoners live in, which include torture, rape, slave labour and other forms of collective punishment. They also lack food supplies, medical care and adequate clothing.

“Their personal stories were extremely harrowing,” Ms. Pillay said. “They described a system that represents the very antithesis of international human rights norms.”

The High Commissioner cited the case of one person she met who was born in a camp and spent the first 23 years of his life there, where he was not only tortured and subjected to forced labour but, at the age of 14, was also made to watch the execution of his mother and his brother.

Ms. Pillay emphasized the importance of obtaining access to the country to be able to provide human rights protection to the most vulnerable populations, since what little is known about the camps comes from those who managed to escape.

“The highly developed system of international human rights protection that has had at least some positive impact in almost every country in the world seems to have completely bypassed DPRK, where self-imposed isolation has allowed the Government to mistreat its citizens to a degree that should be unthinkable in the 21st century.”

Ms. Pillay called on the international community to take a “much firmer step” towards finding the truth about the elaborate network of prison camps, and apply pressure on DPRK to bring about change for its 20 million citizens.

Noting that both the Human Rights Council and the General Assembly have adopted strong resolutions, without a vote, condemning the Government for the systematic human rights abuses taking place, Ms. Pillay said it was time to take stronger action, and that a very significant first step could be made by setting up an independent international inquiry.

“For years now, the Government of DPRK has persistently refused to cooperate with successive Special Rapporteurs on the situation of human rights in the DPRK appointed by the Human Rights Council, or with my Office,” the High Commissioner said. “For this reason, and because of the enduring gravity of the situation, I believe an in-depth inquiry into one of the worst – but least understood and reported – human rights situations in the world is not only fully justified, but long overdue.” 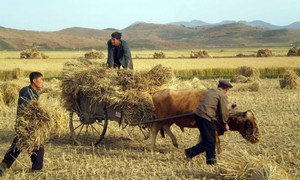 There has been an increase in staple food production in the Democratic People’s Republic of Korea (DPRK) for the second year running but under-nutrition persists for nearly three million people, according to a new United Nations assessment released today.