At Holocaust memorial event, Ban highlights need for courage to do what is right

Genocide, anti-Semitism and Islamophobia, the responsibility to protect, the conflict in Syria and the courage to do what is right were among the topics highlighted in United Nations Secretary-General Ban Ki-moon's remarks today at an event held in memory of the victims of the Holocaust.

“For most of us it is hard to imagine the anguish of knowing that you and your loved ones have been singled out to die because of your faith, your culture or your race – yet, this is the stark truth,” Mr. Ban said at the commemoration, held at the Park East Synagogue in New York City, and which included Holocaust survivors amongst its attendees.

“In the Second World War, Jews, Roma and Sinti, homosexuals, communists, the mentally ill – anyone who did not conform to Hitler's perverted ideology of Aryan perfection – were systematically persecuted, rounded up and transported to death camps. Some were murdered immediately; others cruelly worked to death. Such an operation takes extensive organization. It takes many people – from leaders to ordinary citizens – to participate, cooperate or simply turn a blind eye,” he continued. “This is perhaps the greatest tragedy of genocide – and the reason why we must be ever vigilant.”

Noting that attacks which diminish their rights of others can affect the chances of such beliefs taking root, the UN chief highlighted his remarks about Holocaust denial when on a visit to the Iranian capital of Tehran in 2012, as well as the work of the UN Alliance of Civilizations, which was launched in 2005, through the initiative of Spain and Turkey and under the auspices of the UN, and seeks to promote better cross-cultural relations worldwide.

“Neither anti-Semitism nor Islamophobia nor other such forms of bias have a place in the 21st century world we are trying to build,” Mr. Ban said. “This is also why I worry about the continued stalemate in negotiations between Israel and the Palestinians. We now have a whole generation of young people on both sides who risk growing up with a demonized, dehumanized – and utterly false – concept of their neighbours.”

“They need to be educated to co-exist peacefully with their neighbours,” he continued. “The only way to build peace is to build bridges and break down walls. Doing so will take courage, but it must be done.”

In relation to this year's International Day of Commemoration in Memory of the Victims of the Holocaust, the UN chief noted that the theme for the observance – 'Rescue during the Holocaust: The Courage to Care' – is aimed at honouring those who risked their lives and their families to save Jews and other victims of persecution from almost certain death during the Second World War.

“Some, like Raoul Wallenberg, are household names,” Mr. Ban said. “But most are unsung heroes – brave men and women from all walks of life, and many nations… their example is as relevant today as ever.”

He added, “In a world where extremist acts of violence and hatred capture the headlines on an almost daily basis, we need to take inspiration from these ordinary people who took extraordinary steps to defend human dignity.”

While the International Day is on 27 January, a range of events – organized by the Holocaust and the United Nations Outreach Programme and including exhibits, film screenings, educational activities, as well as the annual memorial ceremony – will be held the week beginning 21 January to mark the moral values and courage that lie behind the acts of rescue involving tens of thousands of Jews, Roma and Sinti and others during the Holocaust.

In his remarks at the synagogue, the Secretary-General recalled his visit last year to Srebrenica, in Bosnia and Herzegovina, where at least 6,000 Muslim men were killed in 1995 during the conflicts that affected much of the Balkan region. The Srebrenica massacre is widely considered the worst act of genocide in Europe since the Holocaust.

“I visited the graves and wept with the mothers of the slain. It is not an easy place for a United Nations Secretary-General to visit. The United Nations – the international community – failed to protect thousands of Bosnian Muslim men and boys from slaughter,” Mr. Ban said.

“The shadow of Srebrenica has joined that of Rwanda, Cambodia, the Holocaust. Each time we hear 'never again,'” he continued. “But can we truly say we have learned the lessons of these tragedies? As an international community, do we have the courage to care – and the resolve to act?”

The UN chief also flagged the principle of the responsibility to protect, which – adopted by the UN General Assembly in 2005, at the level of Heads of State and Governments – puts the obligation firmly on States to protect their populations from genocide, crimes against humanity, war crimes or ethnic cleansing.

“In the face of these crimes and violations there is a corresponding duty of the international community to act. The responsibility to protect applies everywhere and all the time,” Mr. Ban said. “It has been implemented with success in a number of places, including in Libya and Côte d'Ivoire. But today it faces a great test in Syria.”

“I am deeply concerned about the situation in Syria not simply because of the terrible suffering, but because of what may come next. Each day's delay in resolving the crisis raises the spectre of the violence spreading along religious and ethnic lines. Each day's delay sees new atrocities by both sides,” Mr. Ban said.

“It is essential that all perpetrators of international crimes understand that they will be held to account,” he stated. “There will be no amnesties for those most responsible. The old era of impunity is ending. In its place, slowly but surely, we are building a new age of accountability. But the important thing is to end the violence in Syria – now – and begin the process of transition.”

The Joint Special Representative of the United Nations and the Arab League on the Syrian crisis, Lakhdar Brahimi, has been engaged in meetings in the region and elsewhere, as part of his efforts to bring about a negotiated, political solution to end the Syrian conflict.

Mr. Brahimi has reiterated the belief that a political solution can be achieved, based on the so-called Geneva communiqué of 30 June 2012, which, among other items, calls for the establishment of a transitional governing body made up by members of the present Government and the opposition and other groups, as part of agreed principles and guidelines for a Syrian-led political transition.

The Geneva communiqué was issued after a meeting in the Swiss city of the so-called Action Group for Syria and lays out key steps in a process to end the violence in the Middle Eastern country. 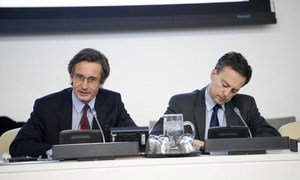 The 74th anniversary of the Kristallnacht – the violent attack in Germany and Austria against Jews and their homes, synagogues and businesses in 1938 – was observed at United Nations Headquarters this week with two discussions involving renowned experts on some of the issues related to the pogrom.