UN Photo/Logan Abassi
The Haitian government and international agencies continue their efforts to relocate the 390,000 people still living in camps across Haiti after the January 12, 2010 earthquake.

11 January 2013
Secretary-General Ban Ki-moon today called on the international community to continue its support for Haiti as he marked the third anniversary of the devastating earthquake that struck the Caribbean country, while praising the progress achieved so far.

“My memories of the damage and suffering, which I saw first-hand during two visits, are still fresh, but I also have a keen sense of the progress that has been achieved in reconstruction and recovery over the past three years,” Mr. Ban said in a message in observance of the earthquake.

Since then, Haiti has been affected by a cholera epidemic and has been hit by several tropical storms, which have increased the risk of food insecurity and damaged much of the its infrastructure.

“I continue to call on the international community to stand with Haiti at its time of dire need,” he added. “Mr. Ban said in his remarks, which were also delivered in Port-au-Prince today by the Under-Secretary-General for Peacekeeping Operations, Hervé Ladsous.

“I know we are all concerned about the fate of more than 300,000 displaced Haitians, who continue to live in make-shift camps, and about the successive hurricanes that have destroyed many livelihoods and raised the spectre of food insecurity,” he added.

For his part, Mr. Ladsous reiterated the world body’s commitment to Haiti, stressing that the peacekeeping operation there – the UN Stabilization Mission in Haiti (MINUSTAH) – will address various pressing issues there, including security consolidation and the rule of law, which are essential for stimulating investment and economic growth, as well as job creation.

“The international community and MINUSTAH have invested heavily and now, more than ever, we need to work hand in hand with Haitians,” Mr. Ladsous said in a news conference. “Our first task is to consolidate security,” he said, adding that considerable progress has been made on this front. 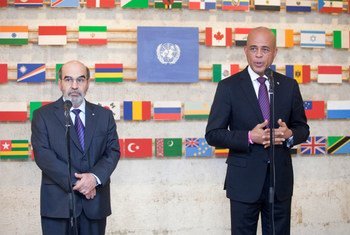 23 November 2012
The United Nations Food and Agriculture Organization (FAO) has stressed that investments are crucial to help rehabilitate Haiti’s agricultural sector in the wake of various natural disasters this year that caused colossal damage to the farming and fishing industries.