11 January 2013
The United Nations-African Union peacekeeping mission in the Sudanese region of Darfur today expressed alarm over tribal fighting in the Jebel Amer area, which has led to casualties and displaced thousands of people.

While providing full assistance and preparing to send a team to assess the situation on the ground, the hybrid mission – known by the acronym UNAMID – is also urging the Sudanese Government, local authorities and leaders from the Beni Hussein and Abbala tribes to end the fighting and give dialogue a chance.

According to an UNAMID news release, the fighting reportedly erupted on 5 January in the Jebel Amer area near Kabkabiya, in North Darfur state, and resulted in a number of casualties, looting, the burning of nearby villages, and the displacement of thousands of civilians forced to flee towards the towns of Kabkabiya, Saraf Omra, and Al Sereif.

On 7 January, immediately following initial reports of fighting, UNAMID's head, the Acting Joint Special Representative, Aichatou Mindaoudou, held talks on the incident with the governor of North Darfur. In that meeting, she offered UNAMID's assistance with facilitating humanitarian assistance and supporting mediation and reconciliation efforts.

So far, UNAMID has mobilized three medical evacuation flights along with three medical teams, and evacuated 26 casualties from Al Serief and Kabkabiya towns to El Fasher, the capital of North Darfur.

The peacekeeping operation has also mobilized four other special flights in support of the ongoing mediation efforts undertaken by a delegation led by the governor.

In addition, as part of its immediate response, UNAMID had also dispatched a verification patrol from the Saraf Omra locality to Jebel Amer on 7 January. The patrol was stopped by Beni Hussein tribesman in the Umurharwa area, alleging that an imminent attack was to be launched by the Abbala tribe – UNAMID noted that this allegation remains unconfirmed.

“In order to assess the needs of the displaced persons and affected population and to provide required assistance including mediation and reconciliation efforts, UNAMID reiterates the need for the mission and the humanitarian community to be granted unimpeded access to all areas of recent fighting,” the peacekeeping mission stated in its news release. 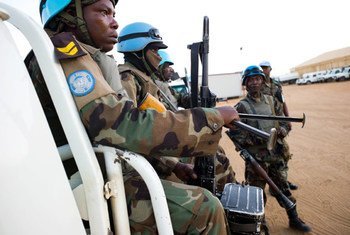 21 December 2012
Amidst reports of civilian displacement in the wake of air strikes in the Sudanese state of North Darfur, the joint United Nations-African Union peacekeeping mission in the region today warned that continued fighting could lead to a “catastrophic humanitarian situation” for the displaced civilians.