IRIN/Kenneth Odiwuor
The use of mercury to extract gold poses health risks to artisanal miners.

10 January 2013
Communities in developing countries are facing increasing health and environmental risks linked to exposure to mercury, according to new studies by the United Nations environmental agency.

Produced by the UN Environment Programme (UNEP), the studies note how parts of Africa, Asia and South America could see increasing emissions of mercury into the environment, due mainly to the use of the toxic element in small-scale gold mining, and through the burning of coal for electricity generation.

“Mercury, which exists in various forms, remains a major global, regional and national challenge in terms of threats to human health and the environment,” UNEP’s Executive Director, Achim Steiner, said in a news release on the studies.

Mercury – a naturally-occurring, silvery-white metal that is liquid at ordinary temperatures – can be harmful to humans and the environment. When released from industry and other man-made sources, it can circulate in the environment for up to centuries at a time. This, according to UNEP, means that it is likely to be several years or decades before reductions in mercury emissions have a demonstrable effect on mercury levels in nature and the food chain.

One of the UNEP studies, the Global Mercury Assessment 2013 – which provides a comprehensive breakdown of mercury emissions by region and economic sector – reports that emissions of the toxic metal from artisanal gold mining have doubled since 2005, in part due to new and better information, but also due to rising gold prices that are expected to lead to further increases

Due to rapid industrialization, it further notes, Asia is the largest regional emitter of mercury, and accounts for just under half of all global releases.

The UNEP study also assesses, for the first time at a global level, releases of mercury into rivers and lakes. Much human exposure to mercury is through the consumption of contaminated fish, making aquatic environments the critical link to human health.

In the past 100 years, man-made emissions have caused the amount of mercury in the top 100 metres of the world’s oceans to double. Concentrations in deeper waters have increased by up to 25 per cent.

The study highlights significant releases into the environment linked to contaminated sites and deforestation, with an estimated 260 tonnes of mercury – previously held in soils – being released into rivers and lakes.

Along with a parallel UNEP study, Mercury: Time to Act, the new assessment will be formally presented at the International Negotiating Committee on Mercury, to be held in Geneva from 13 to 18 January this year.

According to UNEP, governments attending the conference are aiming to conclude discussions on a global legally binding treaty to minimize risks to people and the environment from exposure to mercury.

The UN agency notes this would reduce cases of neurological and behavioural disorders, and other health problems linked to mercury, as well as the contamination of soils and rivers caused by man-made emissions of the metal.

Governments gave the green light to negotiations towards a global treaty at the UNEP Governing Council held in Nairobi, Kenya, some years ago.

“In 2009, at the UNEP Governing Council, nations agreed to launch negotiations for a legally binding treaty aimed at bringing down releases from sources such as industry and mining, address mercury-containing products, and tackle historical pollution sites—the final negotiations begin in just a few days’ time,” said Mr. Steiner.

“Mercury has been known as a toxin and a hazard for centuries – but today we have many of the alternative technologies and processes needed to reduce the risks for tens of millions of people, including pregnant mothers and their babies,” the UNEP chief added. “A good outcome can also assist in a more sustainable future for generations to come.”

The UNEP studies state the fact that mercury released from man-made sources can circulate for such a long time reinforces the need for swift action by governments, industry and civil society to strengthen efforts to reduce mercury emissions and releases.

Delays in action, according to the reports, will lead to slower recovery of ecosystems and a greater legacy of pollution.

Amongst other findings in the studies, UNEP highlights the rising levels of mercury present in the Arctic, where an estimated 200 tonnes of mercury are deposited each year, generally far from where it originated. Studies have shown a ten-fold increase in levels of mercury in certain Arctic wildlife species in the past 150 years, due mainly, it is thought, to human activity.

The two UNEP studies state that global emissions of mercury have remained relatively stable in the last 20 years, with 2010 emissions from human activities thought to be just under 2,000 tonnes.

However, despite improved availability of data on mercury, the emissions estimate is still subject to uncertainty, and covers a range of 1,010 to 4,070 tonnes.

Coal burning is responsible for some 475 tonnes of mercury emissions annually, or around 24 per cent of the global total. UNEP notes that despite increased coal combustion in certain regions, more stringent regulations on pollution in several countries have contributed to reducing overall mercury emissions from coal burning and off-setting part of the emissions arising from increased industrial activity.

Greater exposure to mercury poses a direct threat to the health of some 10-15 million people who are directly involved in small-scale gold mining, mainly in Africa, Asia and South America. An estimated three million women and children work in the industry.

Mercury-free methods and other low-cost solutions for reducing emissions during gold extraction are available, UNEP notes, but socio-economic conditions, and low awareness of the risks of mercury, are barriers to adopting safer techniques. 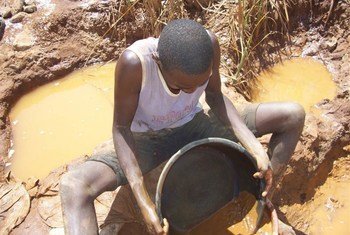 2 July 2012
Over 500 representatives from governments and civil society organizations are taking part in a United Nations-backed meeting in Punta del Este, Uruguay, which seeks to negotiate a global treaty that would reduce the use of mercury.