The United Nations today reported that food prices fell for the third month in a row in December last year, balancing out sharp increases registered earlier in 2012, which had previously sparked fears of a food crisis.

In a news release, the UN Food and Agriculture Organization (FAO) said its most recent Food Price Index dropped 1.1 per cent from November. The decline from 213 to 209 points was largely due to the continuing decrease in the international prices of cereals, oils and fats.

The Index measures the monthly change in international prices of a basket of 55 food commodities, including meat, dairy, sugar, and cereals. The prices for cereals also increased slightly, while sugar and oils prices fell.

“The result marks a reversal from the situation last July, when sharply rising prices prompted fears of a new food crisis,” said the Assistant Director-General in charge of FAO’s Economic and Social Development Department, Jomo Sundaram.

“But international coordination, including through the Agricultural Market Information System (AMIS), as well as flagging demand in a stagnant international economy, helped ensure the price spike was short-lived and calmed markets so that 2012 prices ended up below the previous year’s levels,” he added.

According to its website, the AMIS initiative – for which the Secretariat is based at FAO Headquarters in Rome, Italy – seeks to enhance food market transparency and encourage coordination of policy action in response to market uncertainty, mainly focusing on four foods that are particularly important in international markets: wheat, maize, rice and soybeans.

As a whole, the Index averaged 212 points in 2012, seven per cent less than in 2011. The sharpest falls in prices were registered in sugars, dairy products and oils, and to a lesser extent in cereals and meat.

From July to September, cereal prices had steadily increased due to uncertainties and tight supplies. However, they began dropping in October because of weaker demand for supplies in industrial uses.

Oils and fats prices experienced a 1.9 per cent drop mainly due to the continued build up of large global inventories of palm oil, and sugar prices decreased only marginally. FAO noted that an increase in global sugar production, especially in Brazil, kept international prices down for much of the second half of 2012.

Meat prices registered a slight decrease as pig prices fell by 2 per cent, the agency stated, while dairy prices rose by 0.9 per cent – they were the only commodities to have experienced a rise in price as the dairy market is increasingly susceptible to supply changes related to pasture conditions, feed availability and affordability.

♦ Receive daily updates directly in your inbox - Subscribe here to a topic.
♦ Download the UN News app for your iOS or Android devices.
food|price 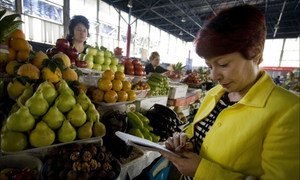