The acting head of the United Nations-African Union peacekeeping mission in the Sudanese region of Darfur today expressed serious concern over fighting taking place in its Jebel Marra area.

The Acting Joint Special Representative and head of the hybrid mission – known by the acronym UNAMID – Aichatou Mindaoudou, voiced her concerns today in a meeting with the Governor of Central Darfur state, Yousif Tibin, during a visit to the state’s capital, Zalingei.

According to an UNAMID news release, the governor informed Ms. Mindaoudou that armed groups had taken control of the towns of Golo and Rockero in the west of the mountainous Jebel Marra area, which is located in the central Darfur region. He also stated that approximately 850 families had been displaced and fled to the village of Nertiti as a result of the fighting, while others are believed to be wandering in the mountains seeking safety.

Ms. Mindaoudou deplored the ongoing fighting “which endangers the safety of the civilian population in the area,” and assured the governor of UNAMID’s continued assistance in facilitating humanitarian assistance to all those in need.

“Ms. Mindaoudou also stressed that all parties involved in the conflict should respect their obligations under international human rights and humanitarian law,” the peacekeeping mission added. 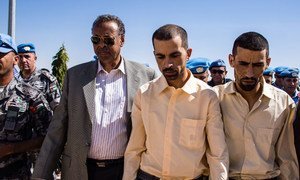 Two United Nations peacekeepers, Hasan Al-Mazawdeh and Qasim Al-Sarhan, both Jordanian nationals, who had been abducted in Sudan’s Darfur region were released today, after 136 days in captivity.