“The Security Council’s sanctions committee for the DRC has led the way in focusing on crimes of sexual violence,” the Secretary-General’s Special Representative on Sexual Violence in Conflict, Zainab Hawa Bangura, added in a news release.

“I also welcome the designation of Lt. Col. Eric Badege and Jean-Marie Lugerero Runinga of M23 for serious violations of human rights and international humanitarian law,” she continued.

On the last day of 2012, the Security Council’s so-called ‘1533 Committee’ added the FDLR and the M23 – as well as Lt. Col. Badege and Mr. Runinga – to its list of individuals and entities subject to sanctions.

The Committee is named after the Council’s resolution 1533. Agreed on in 2004, the resolution deals with sanctions including an arms embargo which applies to non-governmental entities and individuals operating in DRC and which are not part of the Government’s integrated army or police units, as well as targeted travel and financial sanctions against individuals or entities that have violated the embargo or are otherwise designated.

“I urge Member States to ensure the full implementation of the measures imposed by the Security Council, including the travel ban and asset freeze,” Ms. Bangura said.

In the 1533 Committee’s decision to add the two entities to the sanctions list, it noted their involvement in violations of international law, including sexual violence, amongst other violations. In relation to Mr. Runinga, the Committee noted his leadership role in the M23, while Lt. Col. Badege was identified as a military leader.

The problem of armed groups in the eastern DRC has been a long-running one for many years, displacing thousands of people and causing major humanitarian problems in the area. Made up primarily of ethnic Hutu fighters linked to the 1994 genocide in Rwanda, the FDLR has been active since late 1994, mainly in the country’s east.

Meanwhile, the M23 – made up of former national army troops who mutinied in April and named after a 23 March 2009 peace agreement that they reportedly say has not been implemented – was active throughout 2012.

M23 fighters occupied the Goma, the capital of the eastern province of North Kivu, in late November, after an advance that included clashes with the DRC armed forces, known by the French acronym FARDC.

Amidst widespread condemnation and calls for their withdrawal, they pulled out from the city of one million after 11 days in accordance with requirements laid out by a regional inter-governmental organization – the International Conference on the Great Lakes Region (ICGLR) – and monitored by some of the 1,500 peacekeepers in the city, stationed there by the UN Organization Stabilization Mission in the DRC (MONUSCO). M23 representatives are currently reported to be in peace talks, taking place in Uganda, with the DRC Government.

“I condemn reported acts of violence being committed in areas controlled by armed groups, including M23 and FDLR,” Ms. Bangura said. “These recent sanctions by the Security Council serve as a reminder and signal of intent that they will be held accountable for all acts of sexual violence committed in these zones.”

The Special Representative also called for the ICGLR to assist the DRC authorities in preventing and responding to conflict-related sexual violence in the eastern DRC – in accordance with the 2010 Declaration of Heads of State and Government of Member States of the ICGLR on the Prevention of Sexual and Gender-Based Violence and the 2006 Protocol on the Prevention and Suppression of Sexual Violence against Women and Girls.

“The prevention of and response to the epidemic of sexual violence in DRC requires a new impetus and multiple partnerships – it is one of many crimes that is certain to be committed when conflict breaks out and families are vulnerable and displaced,” the UN official said. “Unfortunately, it is a scene that is bound to be repeated in the DRC unless we put an immediate end to it.”

In addition, Ms. Bangura called on DRC’s Prime Minister Matata Ponyo Mapon to immediately investigate and prosecute the recent conflict-related sexual violence crimes committed by the FARDC and other forces in Minova, located in South Kivu province, and in Munigi and Goma, located in North Kivu province, in November 2012.

“I also urge the Prime Minister to fully implement the National Strategy to Combat Gender-Based Violence and develop an action plan for the prevention and response to conflict-related sexual violence committed by the security forces and armed groups in DRC,” she added. 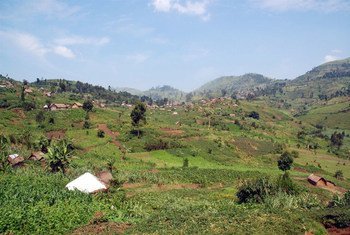 4 January 2013
The substantial increase in violence among ethnic groups in the Democratic Republic of the Congo (DRC) has led to a serious humanitarian crisis, displacing thousands of people who live in hostile conditions, the United Nations peacekeeping mission in the country said today.