United Nations Secretary-General Ban Ki-moon “deeply regrets” the decision of a Bahraini appeals court to uphold the sentences, including life imprisonment, against 20 Bahraini political activists, according to his spokesperson.

“He reiterates his firm belief that the only way to promote peace, stability, justice and prosperity in Bahrain is through a national dialogue which addresses the legitimate aspirations of all Bahrainis, and in which all communities can participate freely, without fear or intimidation,” the spokesperson added in a news briefing at UN Headquarters in New York.

“The Secretary-General calls on all Bahrainis to contribute to creating a peaceful and conducive atmosphere for such a dialogue to begin as soon as possible,” the spokesperson said, noting that the UN chief also calls on the Government of Bahrain to follow through on its recently reiterated commitment to judicial reform.

In early 2012, the Gulf country experienced clashes between security forces and demonstrators, a year after widespread civil protests first emerged there. In June 2011, the King of Bahrain had established the so-called Bahrain Independent Commission of Inquiry to investigate incidents that occurred during the country’s unrest.

According to media reports, the 20 activists involved in the Court of Cassation’s decision – made on Monday – were among opposition leaders and others originally convicted by a special military tribunal in 2011 of plotting to overthrow the State, and had been sentenced to between five years and life in jail.

All 20 were reported to have lost an appeal in a civilian court last September, and the appeal court’s decision yesterday upheld their convictions – although only 13 of them had appealed, with the remaining seven tried in absentia because they were out of the country or in hiding.

Earlier Tuesday, addressing reporters in Geneva, a spokesperson for the Office of the UN High Commissioner for Human Rights (OHCHR), Cécile Pouilly, expressed disappointment over Bahrain’s decision to uphold the convictions of the 13 pro-democracy activists in spite of concerns raised by an independent human rights panel and appeals by the international community.

“We regret that Bahrain’s highest court on Monday upheld the convictions of 13 activists for their role in pro-democracy demonstrations, after two years of trials and despite the conclusions of the Bahrain Independent Commission of Inquiry and the appeals by the international community concerning the judicial procedure and allegations of torture,” Ms. Pouilly said.

“These persons are political and human rights activists and we are concerned they may have been wrongly convicted for legitimate activities. We are also concerned by the extreme harshness of some of the sentences, including imprisonment for life,” she added.

At the news briefing, the OHCHR spokesperson also condemned the arbitrary detention of the Vice President of the Bahrain Center for Human Rights, Said Yousif Al-Muhafdhah, who was arrested on 17 December 2012 while monitoring a protest in the capital, Manama.

Mr. Al-Muhafdhah was also sending messages on the online platform Twitter about attacks on protesters and posted a picture of a demonstrator wounded during the protest. According to the UN agency, the case is expected to be reviewed by the public prosecution office on Wednesday.

“We call on the Bahraini authorities to release him immediately,” Ms. Pouilly said. 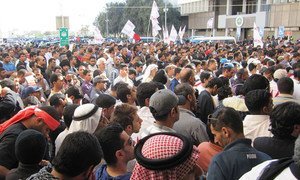 A United Nations assessment team will head to Bahrain in early December, at the invitation of the Government, to discuss the judicial system and accountability for present and past human rights abuses, it was announced today.