4 January 2013
The substantial increase in violence among ethnic groups in the Democratic Republic of the Congo (DRC) has led to a serious humanitarian crisis, displacing thousands of people who live in hostile conditions, the United Nations peacekeeping mission in the country said today.

After conducting an evaluation mission last month to assess the security situation in the Masisi territory in North Kivu province, located in the country’s east, the UN Organization Stabilization Mission in the DRC (MONUSCO) reported that there has been a significant increase in the number of internally displaced persons (IDPs) at the Kilimani, Kalinga, Lushebere and Bihito camps in Masisi.

“Currently, 20,700 IDPs are living in the four camps, and 8,000 others have settled in an additional camp in central Masisi,” MONUSCO noted on its website. “In addition, a large number of other IDPs are living with host families and in other public sites. All have to deal with the hostility of the local communities who suspect them of having links with the armed groups.”

“Violence and harsh living conditions are the daily lot of those IDPs,” the peacekeeping mission added. “At long last they were able to receive their first food assistance on 30 December when trucks finally arrived after two-week drive on very difficult roads.”

MONUSCO pledged to step up its presence in Masisi with peacekeepers from its brigade in North Kivu. The peacekeeping operation has 6,700 and 4,000 troops in the provinces of North and South Kivu, respectively. North Kivu alone is four times the size of Belgium.

Since September, central Masisi has witnessed a surge in the number of ethnic-related incidents. According to MONUSCO, at the heart of the conflict are two main groups: various armed groups allied with ethnic Hutus and other ethnic Hunde armed groups such as the Mai Mai Nyatura, the Alliance patriotique pour un Congo libre et souverain, the Forces Démocratiques Congolaise, the Maï Maï Kikokota and the Maï Maï Rahiya Mutomboki.

The violence reached its peak between 3 and 29 November with attacks against the Shoa, Buabo, Banyungu, Biiri in central Masisi and Kihuma localities, leaving 40 dead. Minor incidents have since continued to be reported in the region.

The problem of armed groups in the eastern DRC has been a long-running one for many years, most recently throughout 2012, when – in addition to the activities of other armed groups – fighters from the 23 March Movement (M23) occupied the Goma, the capital of North Kivu.

The M23 – made up of former national army troops who mutinied in April and named after a 23 March 2009 peace agreement that they reportedly say has not been implemented – entered the city on 19 November, after an advance that included clashes with the DRC armed forces.

Amidst widespread condemnation and calls for their withdrawal, they pulled out from the city of one million after 11 days in accordance with requirements laid out by a regional inter-governmental organization, and monitored by some of the 1,500 MONUSCO peacekeepers in the city. 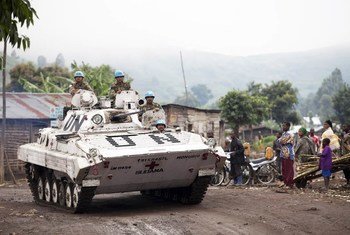 2 January 2013
The United Nations peacekeeping mission in the Democratic Republic of Congo (DRC) today dismissed several rumours related to the presence of an armed group in the country’s east.