Following recent attacks on several towns in the country’s north-east, a rebel alliance known as ‘Séléka’ reportedly halted their advance this week on the capital, Bangui, and agreed to start peace talks, with representatives from both meeting in the Gabonese capital, Libreville.

“An estimated 316,000 people are living in the affected areas, and some 700,000 persons in Bangui are at further risk of an escalation in fighting,” the UN Office for the Coordination of Humanitarian Affairs (OCHA) said in a situation report on CAR issued on Wednesday night.

“There are reports of people fleeing their homes for safety from a number of areas, including Bangui, in and around Ndélé where the fighting initially broke out, and across the borders to the Democratic Republic of the Congo and to Cameroon,” it added.

Both Secretary-General Ban Ki-moon and the Security Council have condemned the attacks and called on the rebels to halt hostilities.

The Secretary-General’s Special Representative and Head of the UN Integrated Peacebuilding Office in CAR (BINUCA), Margaret Vogt, has remained in close dialogue with the key parties and has offered support to political negotiations.

OCHA also noted that the violence has prompted the temporary evacuation of humanitarian staff out of affected areas and has “seriously disrupted” life-saving humanitarian programmes in those areas. 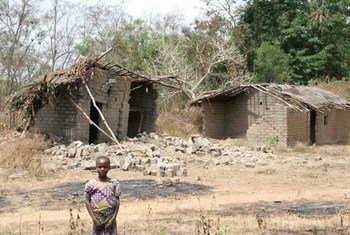 2 January 2013
The United Nations continues to follow the situation in the Central Africa Republic (CAR) with serious concern and calls on both the Government and the rebels to resolve the current crisis through dialogue, a spokesperson for the world body said today.