The top United Nations official for Somalia today signalled the need for uninterrupted international support for the Horn-of-Africa country if gains over the past year are to be consolidated and advanced.

“For the first time in a generation, a safe, secure and prosperous Somalia at peace with itself and its neighbours seems more like a reasonable aspiration than a distant dream,” said Secretary-General’s Special Representative for Somalia, Augustine P. Mahiga, in a ‘year-end’ letter to the people of Somalia and the international community.

“However, the road to stabilization will not be easy,” he added. “Somalia remains a state in need of support from the international community, which will need to re-invest comprehensively and generously if it is to capitalize on its massive investment of time and resources.”

August marked a historic political watershed for modern-day Somalia with the swearing-in of the country’s first formal parliament in more than 20 years.

The event brought to an end the so-called Somali “transition,” which had begun with the 2004 launch of a UN-backed interim government after Somalis had been without a functioning government since the overthrow of dictator Mohamed Siad Barre in 1991.

In his letter, Mr. Mahiga spoke of the New Year being “full of promise and hope” for the country, which, since 1991, has seen warlords, Islamist militants, and its neighbours variously involved in its affairs.

“After several failed attempts to end of the Transition in Somalia, we succeeded this past year because the process was inclusive, transparent, legitimate, participatory and Somalia-owned,” the UN envoy said.

The Special Representative also heads the UN Political Office for Somalia (UNPOS), which the was established in 1995 to help the world body “advance the cause of peace and reconciliation through contacts with Somali leaders, civic organizations and the states and organizations concerned.”

UNPOS supports the African Union (AU) peacekeeping force in Somalia which, known by the acronym AMISON, has since 2007 been trying to help bring peace in the country.

A series of Somali Government and AU offensives, as well as a Kenyan army incursion in 2011, resulted in the end of frontline combat involving the al-Shabaab Islamist militant group in the Somali capital of Mogadishu in August last year. Al-Shabaab lost its last urban stronghold – the important southern port of Kismayo – this past October, along with the significant inland town of Wanla Weyn.

“At the beginning of the year, my office and half of its staff relocated to Somalia and continued to work alongside key Somali partners in a variety of sectors,” Mr. Mahiga said in his year-end letter, in a reference to the move from UNPOS’ former office headquarters in Nairobi, Kenya.

“The centre of gravity has shifted to Mogadishu, and UNPOS (is) completing a major strategic review to ensure full alignment of its policies and programs with the goals and aims of the new government,” he added.

Mr. Mahiga said the mission is in the process increasing staff presence in the Somalia “by 100 per cent in the coming weeks,” as he called on other members of the international community “to come to Mogadishu.”

The Special Representative noted that, in the last year, UNPOS had “closely cooperated with key regional interlocutors to ensure a unified and coordinated approach on important political issues.”

According to Mr. Mahiga, initiatives included the establishment of a “joint framework” between the AU and the Intergovernmental Authority on Development (IGAD) – an eight-country regional body that aims to encourage cooperation between its member states.

“This harmonized international and regional response to challenges within Somalia played a critical role in enabling the international community to speak with one voice in support of the process,” Mr. Mahiga added. 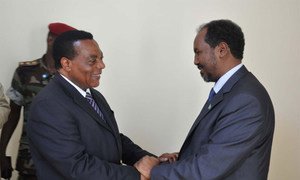 The United Nations top political official for Somalia today welcomed the recent endorsement by the East African country’s parliament of a new cabinet, the so-called Council of Ministers.