UN Photo/Mark Garten
Lakhdar Brahimi, Joint Special Representative of the UN and the League of Arab States for Syria.
30 December 2012

“I am unable to see another solution out of two possibilities: either a political solution that is accepted by the Syrian people which meets its aspirations and legitimate rights, or Syria to be transformed into hell.”

These were among the comments made by the Joint Special Representative of the United Nations and the League of Arab States for Syria, Lakhdar Brahimi, at a news conference today in Cairo, the latest stop in a series of meetings in the region and elsewhere, held as part of his efforts to bring about a negotiated, political solution to end the conflict in the Middle Eastern country.

“People are speaking about a divided Syria into many small states like Yugoslavia. Absolutely no! This is not what is going to happen. What is going to happen is 'Somalization' – warlords and the Syrian people persecuted by people seizing its fate,” Mr. Brahimi added in the media encounter, held jointly with the Secretary-General of the League of Arab States, Nabil El Araby.

Tens of thousands of people, mostly civilians, have been killed in Syria since the uprising against President al-Assad began in early 2011. Recent months have witnessed an escalation in the conflict, which is now in its 22nd month.

According to UN estimates, the number of people in need of humanitarian assistance inside Syria has quadrupled from one million in March this year to four million in December. UN humanitarian aid planning estimates that up to a million Syrian refugees will need help during the first half of next year, with most of these located in Jordan, Iraq, Lebanon, Turkey and Egypt.

In his remarks to the journalists, Mr. Brahimi reiterated his belief in a political solution to the crisis in Syria, noting that “the choice is between the political solution and the entire collapse of the Syrian State” – referring to the so-called 'Geneva communiqué,' which, he said, could form the basis of a peace process.

The document was issued after a meeting in the Swiss city of the Action Group for Syria – made up of interested parties – in late June. It lays out key steps in a process to end the violence in Syria. Amongst other items, it calls for the establishment of a transitional governing body, with full executive powers and made up by members of the present Government and the opposition and other groups, as part of agreed principles and guidelines for a Syrian-led political transition.

Echoing the communiqué, the Joint Special Representative said there should be a ceasefire, followed by the formation of a fully mandated government, and, subsequently, a number of steps leading to the holding of elections.

“What are these elections? And when will [they] take place? It's either electing a president – should there be an agreement to keep the presidential regime – or, more likely, to elect a parliament, because I think that Syrians won't like a presidential regime in the future, like the one they have during the last forty years,” Mr. Brahimi said. “In such case, a parliament and a government will be elected, and Syria will start healing its wounds and, God-willing, the regional and international communities will help Syrians resolve their problems and rebuild their country.”

“This, actually, [is] what we discussed in Syria and in Moscow and are discussing with the US and Russia – you know that I met with Hillary Clinton and Sergey Lavrov and with their aides William Burns and Michael Bogdanov as well,” Mr. Brahimi said. “God-willing, we will continue our contacts, cooperation and meetings seeking this necessary and urgent peaceful solution.”

However, during his exchange with the journalists, the envoy once again noted that he had not detected any willingness from the authorities or the opposition in Syria to enter a political process, and that the international community's engagement was required in this respect.

“The problem is that both sides are not speaking to one another, and are speaking across of one another, and this is where help is needed from the outside, to make sure that everybody speaks about the same thing,” Mr. Brahimi said, in addition to denying claims that he had pronounced, either directly or indirectly, on whether President al-Assad would remain in office in any political solution.

In relation to outside involvement, the Joint Special Representative again highlighted the importance of the international community's involvement given the security risks which Syria's fragmentation poses for the whole region.

“World peace and security will remain under direct threat from Syria if the problem is not solved in the few coming months,” he added. 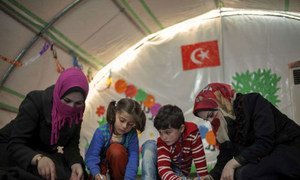 Secretary-General Ban Ki-moon will chair a high-level conference next month to raise funds to alleviate the worsening plight of millions of Syrians affected by the ongoing conflict.