In a resolution establishing universal membership of the former 58-member UNEP Governing Council, the UN General Assembly signalled it was reinforcing the agency’s role as the world’s “leading environmental authority” for setting the global environmental agenda, UNEP said in a news release.

Crucially, the resolution renders UNEP eligible to receive “secure, stable and increased financial resources” from the regular budget of the UN, and “calls for other UNEP donors to increase their voluntary funding,” the release said.

“The decision by the General Assembly to strengthen and upgrade UNEP is a watershed moment,” said UNEP’s Executive Director, Achim Steiner.

“Universal membership of UNEP’s Governing Council establishes a new, fully-representative platform to strengthen the environmental dimension of sustainable development, and provides all governments with an equal voice on the decisions and actions needed to support the global environment, and ensure a fairer share of the world’s resources for all,” he added.

The General Assembly established UNEP a year after the UN’s 1972 Stockholm Conference on the Human Environment – which is widely credited with having placed global environmental issues on the international agenda – called for the creation of a specialized agency within the UN Secretariat to help States coordinate environmental policy.

For its part, today’s General Assembly resolution marks the first major structural change to UNEP in its four-decade history.

“The resolution reaffirms UNEP’s role as the UN's authority on the environment, and provides the mandate to enhance our ongoing work on bringing the latest science to policy-makers, directly supporting national and regional environmental efforts, improving access to technology, and other key areas,” said Mr. Steiner. “For UNEP and the environmental community, this is a truly historic day.”

The resolution follows commitments by world leaders at the UN Conference on Sustainable Development (Rio+20), held in Brazil in June, to improve the institutional framework for a development agenda that meets human needs while also protecting the environment.

“The provisions contained in the resolution are among the first practical steps by the UN General Assembly to implement the outcomes of Rio+20,” UNEP said.

The reform comes as the latest edition of UNEP’s Global Environment Outlook report, released in June 2012, said that significant progress had been made in only four of the 90 leading environmental goals agreed by the international community.

The report warned that, if current trends continued, several critical thresholds may be exceeded, beyond which irreversible changes to the life-support functions of the planet could occur, according to the UNEP release.

In light of the report, the new General Assembly resolution reflects the “commitment of member states to improve global cooperation on the environment in order to meet such challenges, and to promote the integration of the social, economic, and environmental pillars of sustainable development, as well as improving coordination within the UN system,” UNEP said.

The first meeting of the new Governing Council will take place in February. 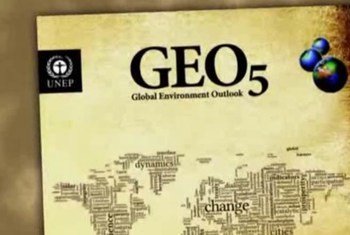 6 June 2012
The United Nations environment agency today warned that the world “continues to speed down” an unsustainable path in spite of hundreds of internationally agreed goals to protect the planet, and stressed that drastic actions and big-scale measures are needed to reverse this pattern.