The findings by UN investigators in DRC come in addition to “at least 126” cases of rape blamed on members of DRC’s armed forces, known by the French acronym of FARDC, the Geneva-based Office of the UN High Commissioner for Human Rights (OHCHR) said in a news release.

“We are highly concerned by these events, which once again are devastating the lives of civilians in eastern DRC; and we are appalled that yet again women and girls are being targeted by a variety of groups, including the national army that is supposed to protect them,” OHCHR said.

“We urge parties to the conflict to ensure strict respect for human rights and international humanitarian law,” it added.

M23 is made up of former national army troops who mutinied in April, and named after a 23 March 2009 peace agreement that they reportedly say has not been implemented. It is now involved peace talks in Kampala, the capital of Uganda, with the DRC Government.

“Further measures should be taken as a matter of priority to identify alleged perpetrators of such violations and to hold them to account,” OHCHR noted in its statement, in a reference directed at all sides.

The atrocities took place after the M23 began an advance last month towards the eastern DRC city of Goma, capital of North Kivu province. The group took the city of one million from FARDC soldiers on 19 November, then occupied it for 11 days before agreeing to a withdrawal. The nearby town of Sake also fell to the M23 on 22 November and underwent a similar temporary occupation by the armed group.

In its statement, OHCHR said UN investigators have documented cases of “arbitrary execution, enforced disappearances, degrading treatment and rape against civilians by M23 fighters in Goma and surrounding areas.”

“The looting of dozens of public and private buildings in Goma and of scores of vehicles by M23 was also reported,” the agency added.

OHCHR said the UN investigators have also received allegations of serious human rights violations in the M23 stronghold of Rutshuru territory, a mountainous North Kivu region that is marked by extreme poverty, but also famous for its mountain gorillas.

The UN investigators, who have so far interviewed more than 200 people for the investigation, are members of the UN Joint Human Rights Office (JHRO), a collaborative effort between OHCHR and the UN Stabilization Mission in the DRC (MONUSCO). They launched their probe after the M23, under the supervision of some of the 1,500 MONUSCO peacekeepers deployed in Goma, withdrew from the city, as well as from Sake, in accordance with requirements laid out in a communiqué issued by the regional intergovernmental group known as the International Conference on the Great Lakes Region (ICGLR).

According to OHCHR, 24 minors were among the 126 females whose rape cases have been documented. The victims are from the town of Minova, near Goma, or the surrounding region, including communities in Kalehe territory, just over the North Kivu border with South Kivu province.

“The perpetrators allegedly were soldiers of the Congolese Army, and the crimes seem to have been committed for the most part as they were retreating from the fighting in Goma and Sake,” OHCHR said.

Investigators also documented “two cases of arbitrary execution, and other cases of mistreatment and widespread looting,” the agency said.

The investigators gathered information by fanning out into the region in two teams this month. Their probe is documenting all violations in the area between 20 and 30 November. Both it and investigations by DRC authorities are ongoing, OHCHR said. 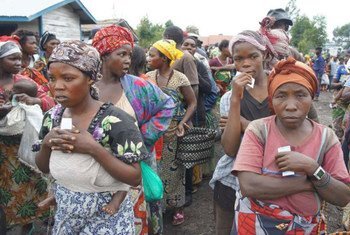 18 December 2012
Preliminary findings by United Nations investigators have documented at least 126 rapes and the killing of two civilians – one a minor – during a probe into human rights violations in a part of the Democratic Republic of Congo (DRC) that recently experienced a new eruption of violent clashes and civilian displacements, a UN spokesperson said today.