The United Nations envoy in Côte d’Ivoire has condemned the armed attacks carried out by unidentified individuals against national security forces in and around the commercial capital, Abidjan, this morning.

Two people were injured in the first attack, which was against a post of the Forces républicaines de Côte d‘Ivoire (FRCI) in Agbaou, east of Abidjan, according to a news release issued by the UN Operation in Côte d’Ivoire (UNOCI).

In the second attack, which targeted the Gendarmerie Brigade in Yopougon, an area in north Abidjan, one prisoner died, the offices of the Brigade were destroyed and several vehicles burnt.

The Secretary-General’s Special Representative and head of UNOCI, Bert Koenders, deplored the attacks and stated that they will not deter the willingness of Ivorians to advance the national reconciliation process.

The attacks were carried out at a time when “the political situation was becoming more hopeful and less tense following an announcement about the imminent release on bail of eight officials of the former regime, who had been arrested and detained after the Ivorian post-electoral crisis,” UNOCI noted.

The peacekeeping mission added that it dispatched reinforcements to support the Ivorian security forces as soon as it was informed of the attacks, and increased its patrols in the affected areas. In addition, UNOCI medical teams helped to evacuate injured FRCI soldiers to Abidjan.

UNOCI was established in 2004 by the Security Council to facilitate the peace process in the West African nation, which was split by civil war in 2002 into a rebel-held north and Government-controlled south.

In the aftermath of the post-election violence that followed the 2010 presidential polls, the peacekeeping mission is assisting the country with a number of key tasks, including the restoration of law and order, national reconciliation, the holding of legislative elections, and economic recovery. 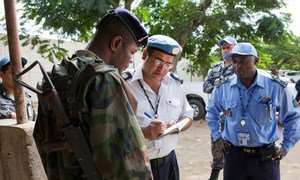