UNHCR/Alixandra Fazzina
People waiting to board a boat to take them across the Gulf of Aden.

21 December 2012
An independent United Nations human rights expert today urged authorities in Somalia to address the root causes that prompt people to put their lives at risk and flee the country, after 55 Somali refugees and migrants drowned in the latest boat disaster in the Gulf of Aden.

“The plight and suffering of Somali boat people must stop,” said the UN Independent Expert on the situation of human rights in Somalia, Shamsul Bari.

On Tuesday, an overcrowded boat that left the port of Bossasso in northern Somalia capsized 15 minutes into its journey, spilling all 60 passengers – Ethiopians and Somalis – into the sea.

According to the Office of the UN High Commissioner for Refugees (UNHCR), the incident is the biggest loss of life in the Gulf of Aden since February 2011, when 57 Somali refugees and migrants from the Horn of Africa drowned while attempting to reach Yemen.

“This tragic incident shows the level of desperation of the people living in areas of Somalia which are still stricken by insecurity and the lack of enjoyment of basic economic, social and cultural rights,” said Mr. Bari.

“Despite the recent security developments in the post-transition period, it is critical to find lasting and sustainable peace in Somalia to stop people from putting their lives at risk by undertaking dangerous journeys across the Gulf of Aden,” he added.

The expert urged the Somali authorities at the national, regional and local levels to renew their efforts to address the root causes of the smuggling and trafficking in persons in Somalia. He also urged the UN organizations on the ground to increase their efforts in raising awareness about the dangers of the perilous journey across the Gulf of Aden.

Despite warnings from UNHCR and other aid agencies about the risks such trips involve, 100,000 people have crossed the Red Sea and the Gulf of Aden this year. In addition to using unseaworthy and overcrowded boats, those fleeing the Horn of Africa region often fall prey to unscrupulous smugglers, in whose hands they can face exploitation, extortion and even death, UNHCR pointed out.

The latest deaths bring to 95 the number of people who have drowned or gone missing in the waters between Somalia and Yemen this year.

“The tragic loss of so many lives is a new and stark reminder of the risks Somali refugees are taking as they flee their country,” UNHCR Representative for Somalia, Bruno Geddo, said after Tuesday’s incident. “Without doubt, the Gulf of Aden is now the deadliest route for people fleeing conflict, violence and human rights abuses in the Horn of Africa.”

Sometimes titled special rapporteurs, independent experts such as Mr. Bari, are appointed by the Human Rights Council to examine and report back on a country situation or a specific human rights theme. The positions are honorary and the experts are not UN staff, nor are they paid for their work. 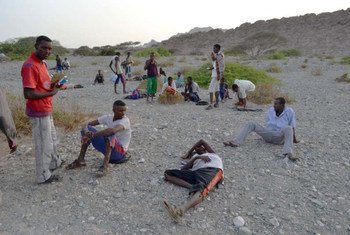 28 August 2012
The flow of refugees and migrants from the Horn of Africa across the Gulf of Aden and the Red Sea towards Yemen continues to exceed previous records, with over 63,800 people having made this perilous journey in the first seven months of 2012, the United Nations reported today.