21 December 2012
The Government of Eritrea must cooperate with an international mandate to provide “an objective, fair and impartial picture” of the human rights situation in the Horn of Africa country, a United Nations independent expert urged today.

“I hope that the Eritrean Government would consider the mandate of the Special Rapporteur as an opportunity to start a fresh and constructive dialogue on human rights issues that have been raised by the international community and other stakeholders,” Beedwantee Keetharuth, the newly-appointed Special Rapporteur on the human rights situation in Eritrea, stated in a news release.

According to multiple reports, the human rights situation in Eritrea is generally viewed as being poor, with allegations of arbitrary arrest and detention, as well as widespread constraints on freedom of speech. In one example dating to early September of this year, the UN condemned the deaths of three Eritrean media workers who had been kept in a prison camp for over a decade.

In July this year, the Geneva-based UN Human Rights Council adopted a resolution in which it strongly condemned the continued widespread and systematic violations of human rights committed by the Eritrean authorities, the severe restrictions on freedom of opinion and expression, and the forced conscription of citizens for indefinite periods. At the same time, it decided to appoint a Special Rapporteur on the matter.

In keeping with her mandate, Ms. Keetharuth, a lawyer from Mauritius with extensive experience in monitoring and documenting human rights violations across Africa, is expected to present her report on Eritrea’s human rights situation to the Council in June 2013.

Ahead of that, she had requested meetings with the country’s diplomats in Geneva and London at the start of her mandate this past November. She noted, however, that the meetings had yet to take place.

“The aim was to introduce myself and present my vision of the mandate in a spirit of openness, as well as to explore avenues for cooperation,” she continued. “I have now requested to travel to Eritrea in early 2013.”

In the news release, Ms. Keetharuth expressed faith that the Eritrean Government would ultimately view her mandate as an opportunity to carefully address the country’s “compliance with its human rights obligations as contained in international treaties to which the country is a party.”

In the meantime, the UN expert added that she would engage with other parties affected by human rights issues in the Eritrea, including those who consider themselves to be the victims of alleged human rights violations, human rights defenders and other civil society actors.

Independent experts, or special rapporteurs such as Ms. Keetharuth, are appointed by the Human Rights Council to examine and report back on a country situation or a specific human rights theme. The positions are honorary and the experts are not UN staff, nor are they paid for their work. 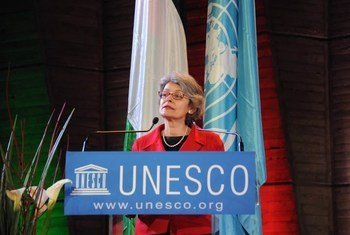 12 September 2012
The head of the United Nations agency tasked with defending press freedom today condemned the recent killing of a Syrian journalist, and voiced grave concern over the death of three Eritrean media workers who had been kept in a prison camp for over a decade.