The United Nations top official on the issue of genocide has warned of the increasing risk of sectarian violence in Syria, and called on all parties to the conflict to refrain from targeting individuals or groups based on religious or ethnic identity.

“I am deeply concerned that entire communities risk paying the price for crimes committed by the Syrian Government,” the UN Special Adviser on the Prevention of Genocide, Adama Dieng, said in a statement issued on Thursday night.

“As the situation in Syria deteriorates further, there is a growing risk that civilian communities, including Alawite and other minorities perceived to be associated with the Government, its security forces, militias and allies could be subject to large scale reprisal attacks,” he added.

At least 20,000 people, mostly civilians, have been killed since the uprising against President Bashar al-Assad began in March 2011. The conflict has spawned more than 500,000 refugees, while an estimated four million people inside the country need urgent humanitarian assistance.

Mr. Dieng’s comments echo those of an independent UN panel probing human rights violations in Syria which yesterday stated in an update covering the 28 September-16 December period that the conflict, now in its 22nd month, has become “overtly sectarian in nature.”

The Commission of Inquiry on Syria also stated that, in addition to the Alawites, the country’s other minority groups – such as the Armenians, Christians, Druze, Palestinians, Kurds and Turkmen – have been drawn into the conflict.

The sectarian lines fall most sharply, the Commission said in its update, between Syria’s Alawite community, from which most of the Government’s senior political and military figures hail, and the majority Sunni community who are broadly, but not uniformly, in support of the anti-Government armed groups.

“I urge all parties to the conflict to adhere to international humanitarian and human rights law, which prohibits the targeting of individuals or groups based on religious or ethnic identity as well as attacks against civilians not taking direct part in hostilities,” said Mr. Dieng.

He also called on all actors in the conflict to condemn hate speech that could constitute incitement to violence against communities based on their religious affiliation – something that has, in the past, been precursors to serious and massive human rights violations and international humanitarian law.

Noting that the Syrian Government is “manifestly failing to protect its populations,” the Special Adviser said the international community must act on the commitment made by leaders at the 2005 World Summit to protect populations from genocide, war crimes, ethnic cleansing and crimes against humanity, including their incitement.

“I also reiterate the calls of the international community for the Security Council to refer the situation in Syria to the International Criminal Court and stress the importance of taking steps now to facilitate future transitional justice processes in Syria to reduce the risk of retribution, promote reconciliation and provide all communities with a sense of justice and dignity,” Mr. Dieng stated.

Elsewhere, Lakhdar Brahimi, the Joint Special Representative of the UN and the League of Arab States for Syria, met today in Cairo with the President of the National Coalition of Syrian Revolution and Opposition Forces, Moaz Al-Khatib, who was accompanied by Vice-Presidents Riad Seif, Suheir Al-Atassi and George Sabra.

“They exchanged views on the situation in Syria and possible ways out,” said a note issued by the UN.

Mr. Brahimi has stated that a political solution to end the crisis is necessary and still possible, and that such a solution would be based on the core elements of the communiqué issued by the Action Group on Syria that met in Geneva on 30 June.

The communiqué called for setting up a transitional governing body, with full executive powers and made up by members of the present Government and the opposition and other groups, as part of important agreed principles and guidelines for a Syrian-led political transition.

Meanwhile, the UN World Food Programme (WFP) said today it will start providing ready-to-eat food to 125,000 vulnerable Palestinians and displaced Syrians caught up in fighting around the Yarmouk camp in the Syrian capital, Damascus.

The densely populated camp, which is eight kilometres from the centre of Damascus, has been home to the largest Palestinian refugee community in Syria since 1957 and has recently housed thousands of displaced Syrians who fled heavy fighting in Damascus and the surrounding areas.

In recent days, Palestinian refugees and thousands of displaced Syrians who had taken refuge in the camp fled due to violence in Yarmouk. Many of them are now in relatives’ homes, mosques, public shelters and schools, WFP said in a news release, adding that they left the camp carrying only their children, with thousands attempting to cross the border to neighbouring Lebanon.

“These people have already suffered tremendously in their journey in search of safety for their families and young children, moving from one place to the other hungry, terrified and cold,” said WFP’s Executive Director, Ertharin Cousin. “We remain committed to supporting the most vulnerable in Syria. No one should go hungry.”

WFP will provide around 12 kilograms of food for each family per week, consisting of ready-to-eat food commodities, including canned goods. The agency provides food assistance to an average of 1.5 million people each month in all 14 governorates in Syria, prioritizing internally displaced persons (IDPs).

As refugees continue to cross the borders to Lebanon, Jordan, Turkey, Iraq and travel as far as Egypt, WFP has extended its regional emergency operation to provide food assistance to up to 755,000 people by June 2013.

In Yarmouk, WFP is coordinating its activities with the UN Relief and Works Agency for Palestine Refugees in the Near East (UNRWA), which has the mandate to assist Palestinian refugees on behalf of the international community.

According to UNRWA, the Yarmouk camp is reportedly calm after days of intense fighting that led to the displacement of tens of thousands of Palestine refugees. Occasional shelling reportedly continues in the areas surrounding Yarmouk and Sbeineh refugee camps, with Sbeineh camp accessible today.

The Agency added that facilities in the Yarmouk, Douma and Jaramana refugee camps remain closed today due to access restrictions, although schools in the camps continue to shelter IDPs. 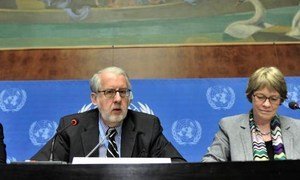