UNHCR/S.Hoibak
Somali refugees make their way past burning rubbish on a street at Ifo camp in Dadaab, Kenya.
20 December 2012

The United Nations refugee agency spoke out today against public statements in Kenya linking the presence of refugees in that country to recent violence – which the agency equally condemned.

“We caution against stigmatization of refugees and asylum-seekers,” said a statement from the Office of the UN High Commissioner for Refugees (UNHCR).

The Geneva-based agency additionally urged Kenya to “continue to uphold the rights of refugees and asylum seekers who have fled to Kenya in search of protection.” UNHCR said this would be in keeping with the east African country’s “long-held commitment to refugee protection.”

Kenya currently hosts 630,000 refugees – more than half a million of whom are from neighbouring Somalia, where civil war has raged for years. In response to a wave of bombings, shootings and grenade attacks, mainly in the capital, Nairobi, and also near the border with Somalia, Kenya this week ordered refugees and asylum seekers in towns to report to two camps, media reports say.

According to the reports, the move affects more than 100,000 refugees of various nationalities, while the attacks are blamed on militants from Somalia, and come in the wake of Kenya’s dispatch of soldiers into that country to help displace the al-Shabaab, an Islamist armed group reportedly linked to al Qaida.

While UNHCR said in its statement that it condemned the recent violence, it added that it noted the Kenyan Government’s recent decision to “discontinue the reception and registration of asylum-seekers in Nairobi and other cities, and move these activities to the refugee camps in Dadaab and Kakuma.”

Situated near the Somali border, Dadaab is the world’s largest refugee camp, hosting the majority of the Somali refugees in Kenya. According to reports, it is severely overcrowded, and holds four times the population it was built to receive. Kakuma is located near Kenya’s border with South Sudan.

“UNHCR understands that registered refugees will be allowed to remain in the places where they have established themselves,” the agency statement said.

It added that UNHCR would “continue to support the Government of Kenya in ensuring that asylum-seekers have access to reception and registration procedures, as well as other services to meet their protection and assistance needs.”

In a reference to camp overcrowding, the refugee agency said it counted on the authorities to “ensure that adequate land and facilities are made available so that the provision of asylum in Kenya remains in line with international standards.”

On the recent violence in Kenya, UNHCR noted that refugees, as well as Kenyans, had lost their lives. “The UN refugee agency condemns these attacks and extends its sympathy and solidarity to all victims, the Kenyan people and their government,” the agency said.

Kenya has “generously been providing a safe haven for refugees for decades,” UNHCR said, highlighting that the country is a signatory to the 1951 UN Refugee Convention, which defines state obligations towards people driven from their homes across international borders, and the 1969 Organization of African Unity Refugee Convention, another key refugee-protection document adopted by the regional organization now known as the African Union. 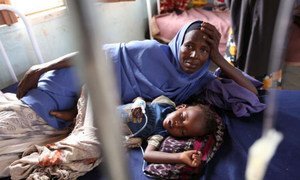 The United Nations refugee agency has launched extensive health measures to combat an outbreak of jaundice in the world’s largest refugee camp, located in northern Kenya.