“We can reach our shared goals if people are able to participate in the formulation and implementation of plans, policies and programmes to shape our common future,” Mr. Ban said in a statement released by his office.

“Commitments without empowerment are words without meaning,” he highlighted as called on “all citizens of the world to help us advance solidarity as a global family.”

In a 2005 resolution establishing the International Day, the UN General Assembly identified solidarity as one of the fundamental and universal values that should underlie relations between peoples in the 21st century.

The move followed the Assembly's 2002 resolution establishing the World Solidarity Fund, which, operated by the UN Development Programme (UNDP), aims to eradicate poverty and promote human and social development in developing countries – especially among the poorest segments of those societies.

In his message, Mr. Ban said this year's observance of the Day comes during a period of dramatic transition.

“People across the world are demanding greater political freedom, accountability and equality,” he said. “Global interdependence is deepening along economic, social, and environmental dimensions.”

In light of these realities, the Secretary-General stated that the world can “best shape solutions for a more secure, sustainable and prosperous future” by acting as one. “Solidarity is crucial to solving problems in our interconnected world,” he said.

Mr. Ban said the world witnessed an “important act of solidarity” in the cohesion exhibited at this year's UN Conference on Sustainable Development (Rio+20), which saw world governments and institutions gather in Rio de Janeiro, Brazil, in June, to consider a range of issues aimed at advancing a poverty eradication agenda worldwide in a way that preserves the environment.

“Governments, civil society and private sector leaders came together and agreed to promote an economically, socially and environmentally sustainable future,” Mr. Ban said of the Conference, the third such gathering on sustainable development.

While the Secretary-General also signaled that solidarity had played a role in the progress achieved towards meeting the Millennium Development Goals (MDGs) set by world governments and institutions in 2000 to dramatically reduce poverty, he called for an intensification of efforts before the MDG target date of 2015.

“We are also laying the groundwork for the post-2015 agenda,” Mr. Ban noted, adding that the “process aims to be participatory, seeking the views of development experts and ordinary citizens around the world.”

UN envoy for most vulnerable nations stresses importance of communications 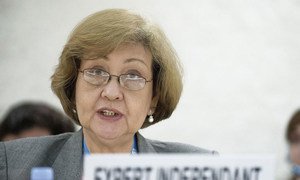 Ahead of new climate change talks next week, an independent United Nations human rights expert today called on countries to rally behind the idea of helping those less able to deal with the impacts of this global problem.