19 December 2012
The United Nations and its humanitarian partners today appealed for $1.5 billion to assist civilians affected by the ongoing conflict in Syria over the next six months, including those inside the country as well as those taking refuge beyond its borders.

The bulk of the appeal – $1 billion – is for the Syria Regional Response Plan, which will support refugees fleeing Syria to Jordan, Iraq, Lebanon, Turkey and Egypt. It is based on planning estimates that up to a million Syrian refugees will need help during the first half of next year.

More than $519 million will be needed to support an estimated four million people inside Syria who need urgent humanitarian assistance, including an estimated two million internally displaced persons (IDPs).

Together, the 2013 Syria Humanitarian Assistance Response Plan – which covers relief activities inside Syria – and the new Syria Regional Response Plan comprise the largest short-term humanitarian appeal ever, according to the UN Office for the Coordination of Humanitarian Affairs (OCHA). They have been revised several times over the course of this year.

Speaking at the launch of the appeal in Geneva, the Regional Humanitarian Coordinator for Syria, Radhouane Nouicer, said the conflict has become increasingly brutal and indiscriminate and is exacting a heavy toll on the Syrian population across the country.

“The violence in Syria is raging and there are nearly no more safe areas where people flee to and find safety, as most parts of the country have now become engulfed in violence, including the capital, Damascus,” he stated.

“We are especially focusing on life-saving interventions and aiming to help people who have become displaced, host families and communities, and the poor suffering from the multiple effects of the current events,” Mr. Nouicer added.

The number of people in need of assistance inside Syria has quadrupled from one million in March 2012 to four million in December. The main needs outlined in the Syria Humanitarian Assistance Response Plan include food assistance, shelter, water and sanitation, nutrition and emergency medical services, cash assistance, basic services, and non-food items, such as mattresses and bedding, kitchen and hygiene sets, and clothes.

Mr. Nouicer noted that it is “highly unusual” for such plans to be revised so often, and it is indicative of the rapid developments on the ground and the dramatically deteriorating humanitarian situation in Syria. “The magnitude of this humanitarian crisis is indisputable,” he said.

According to the Office of the UN High Commissioner for Refugees (UNHCR), there are currently 525,000 Syrians that have either registered as refugees in neighbouring countries or are being assisted – a seven-fold increase since May.

“This massive humanitarian crisis requires urgent support from governments, businesses and private individuals,” said UNHCR’s Regional Coordinator for Syrian Refugees, Panos Moumtzis. “Unless these funds come quickly, we will not be able to fully respond to the life-saving needs of civilians who flee Syria every hour of the day – many in a truly desperate condition.”

At least 20,000 people, mostly civilians, have been killed in Syria since the uprising against President Bashar al-Assad began in early 2011.

The conflict, now in its 22nd month, has “escalated dangerously,” the Under-Secretary-General for Political Affairs, Jeffrey Feltman, reported to the Security Council, as it met today to discuss the situation in the Middle East.

“As we have repeatedly underlined, the military approach pursued by both sides comes at a devastating cost in terms of human lives and destruction, and breeds a serious risk of sectarian and communal strife, radicalization and terrorism. If nothing is done to change the current dynamic, and to move toward a political solution, the destruction of Syria, will be the likely outcome,” he stated.

He added that long-standing fears that the conflict in Syria would seriously threaten the stability and security of Syria’s neighbours have intensified. 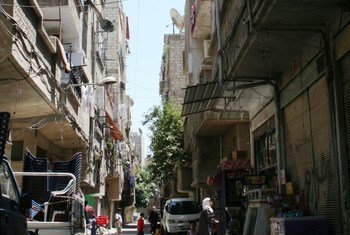 17 December 2012
Secretary-General Ban Ki-moon is alarmed by the continued dramatic escalation of violence in Syria over the past several days, and the grave danger facing civilians in areas under fire, according to his spokesperson.