Secretary-General Ban Ki-moon and two United Nations agencies have condemned the killing of at least six people working on a polio vaccination campaign in Pakistan in the past 24 hours.

The six – reportedly five Pakistani women and one man – were shot dead in the city of Karachi in Sindh province and in the city of Peshawar in Khyber Pakhtunkhwa province. Pakistan is one of three countries, along with Afghanistan and Nigeria, where polio is still endemic.

The UN World Health Organization (WHO) and the UN Children’s Fund (UNICEF) said that those killed were among thousands who work selflessly across Pakistan to eradicate polio. “Such attacks deprive Pakistan’s most vulnerable populations – especially children – of basic life-saving health interventions,” they said in a joint statement.

“We call on the leaders of the affected communities and everyone concerned to do their utmost to protect health workers and create a secure environment so that we can meet the health needs of the children of Pakistan,” the agencies added.

At a media briefing at UN Headquarters in New York today, a UN spokesperson, Martin Nesirky, said that Mr. Ban joins WHO and UNICEF in condemning these “senseless and inexcusable” attacks on health workers.

Mr. Nesirky also noted that the world body’s chief intends to express his condolences and condemnation of the attacks during a meeting today with Pakistan’s Permanent Representative to the UN.

According to the joint statement by the agencies, the Government of Pakistan and the affected provinces have temporarily suspended the vaccination campaign due to concerns over the safety of health workers.

Polio is a highly infectious disease caused by a virus that can cause permanent paralysis in a matter of hours. Safe and effective vaccines protect children from the disease.

WHO polio eradication campaign to vaccinate 80 million children in India 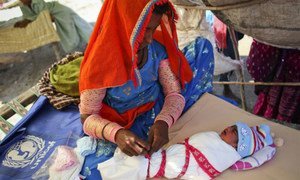 The United Nations condemned the killing of a local community worker in Pakistan on Friday who was part of a polio eradication initiative.