The global forest products industry is slowly recovering from the economic crisis, with the Asia-Pacific region and particularly China taking the lead, according to new data published by the United Nations Food and Agriculture Organization (FAO).

The global forest products industry is slowly recovering from the economic crisis, with the Asia-Pacific region and particularly China taking the lead, according to new data published by the United Nations Food and Agriculture Organization (FAO).

On average, global production of the main forest products grew by one to four per cent in 2011 compared to 2010, FAO stated in a news release. Production of wood-based panels and paper in 2011, for example, was above the pre-crisis levels of 2007 and appears to be growing relatively strong in most regions.

The agency pointed out that China is increasing its importance as a producer of forest products, becoming the world’s second largest producer of sawnwood – which encompasses planks, beams and boards – after the United States, and having overtaken Canada.

China is also playing a key role in international trade in forest products, being the largest importer of industrial roundwood, sawnwood, pulp and wastepaper and the largest exporter of wood-based panels.

The country is also the fifth largest importer of paper and paperboard, despite a huge increase in domestic production since 2007. In 2011, China’s imports of all forest products amounted to $43 billion and account now for 16 per cent of the global total.

In Russia, the largest forest country in the world, the structure of production and trade has changed in the last five years, with a decline in industrial roundwood exports by nearly 60 per cent and an increase in sawnwood production by 8 per cent. Over the same period, Russia has increased its sawnwood exports by 13 per cent.

FAO noted that a high proportion of Russian industrial roundwood exports previously went to China, but the amount fell from 2007 to 2009 due to log export restrictions in Russia. Chinese imports of industrial roundwood have recovered though and some other major producing countries, including the US, Canada and New Zealand, have expanded exports to China. 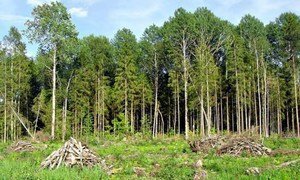 Consumption of forest products across Europe and North America is on the rise again after a two-year slump, the United Nations reported today, noting that overall demand was up by 5.6 per cent last year, a clear indication that the industry may be on a path to recovery.