UN Photo/Violaine Martin
Chairperson of the Working Group on the use of Mercenaires Faiza Patel.

18 December 2012
The Government of Somalia must do more to ensure the security of its citizens while increasing regulations on private military and security companies, a United Nations expert panel urged today at the conclusion of its seven-day visit to the Horn of Africa country.

“As Somalia rebuilds its security institutions, the Government should ensure that private security forces are properly regulated and do not become a substitute for competent and accountable police,” said Faiza Patel, who currently heads the UN’s Working Group on the use of mercenaries.

“All Somalis have the right to security, not just those who can afford to pay for it,” she added.

After decades of factional fighting, the East Africa country has been undergoing a peace and national reconciliation process, with a series of landmark steps that have helped bring an end to the country’s nine-year political transition period and the resulting security vacuum which rendered Somalia one of the most lawless States on the planet. These steps included the adoption of a Provisional Constitution, the establishment of a new Parliament and the appointments of a new President and a new Prime Minister.

The Working Group commended the formation of the new Government and its efforts to establish a functioning, peaceful and democratic nation. It noted, however, that the new administration needed to reinforce its control over the private armed security sector through redefined laws and offered its assistance in developing such legislation by drawing on best practices learned from other countries.

“Such laws and their consistent application are critical to guarantee that private security providers operate in a legal, transparent and accountable manner,” Working Group-member Anton Katz stated, adding that the availability of private security should not detract from “the urgent need to provide security for all Somalis.”

In its findings, the Working Group noted that some private security contractors have not always operated transparently in the East African country and, occasionally, veer away from their prescribed goals of providing simple protection from armed factions, bandits and pirates.

Pointing to one instance in the state of Puntland, the UN experts cited incidents involving the Puntland Maritime Police Force (PMPF) which was created with the aim to repel the continuing scourge of piracy afflicting the Somali coast.

The Working Group established that the PMPF had engaged in operations unrelated to piracy, including a recent case in which the police force had worked to prevent a candidate for the Puntland presidency from campaigning in Bossaso, the area’s largest city.

Ms. Patel warned that the PMPF was operating outside the legal framework and called on local authorities to integrate the force into “the agreed-upon Somali national security structure and ensure that it is used strictly for the purposes for which it is intended.”

Turning to the issue of piracy – a problem which has long affected international shipping in the heavily trafficked waterways off the coast of Somalia – the UN experts said they were satisfied that piracy had decreased over the past year, although they expressed concern at the continuing use of armed guards aboard vessels.

Ms. Patel called upon the international community to reach an agreement on regulations and procedures regarding the use of armed personnel in the shipping industry, cautioning that a failure to do so created risks for human rights violations at sea.

At the same time, the Working Group also examined the use of private contractors by the UN as well as the UN-backed African Union Mission in Somalia (AMISOM), and welcomed efforts to ensure that the security providers had a clean human rights record and maintained the “gold standard” when it came to human rights issues.

In addition to Ms. Patel of Pakistan, the working group is currently composed of Patricia Arias of Chile, Elzbieta Karska of Poland, Anton Katz of South Africa, and Gabor Rona of the United States and Hungary. Reporting to the Geneva-based Human Rights Council, they are independent from any government or organization, and serve in their individual capacities. 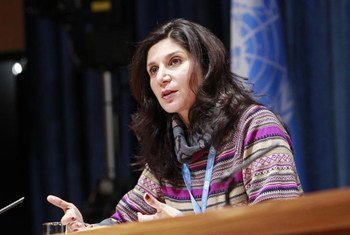 1 November 2011
A United Nations expert panel today warned of an alarming resurgence of the use of mercenaries in armed conflict, and called for regulating private military and security companies, whose activities raise numerous human rights challenges.