On International Migrants Day, United Nations independent experts have joined forces with regional counterparts to highlight the human rights of migrants, while expressing renewed concerns over the criminalization of irregular migration by some countries and calling for an end to the administrative detention of migrants.

“Crossing a border without the required documentation or overstaying a visa is not per se a crime, but rather at most, an administrative offence,” said the UN Special Rapporteur on the Human Rights of Migrants, François Crépeau, and the Chairperson of the UN Committee on the Protection of the Rights of All Migrant Workers and Members of Their Families (CMW), Abdelhamid El Jamri, in a joint statement with other human rights experts.

According to UN figures, the total number of international migrants has increased over the last 10 years from an estimated 150 million in 2000 to 214 million persons today – the numbers are such that migrants would constitute the fifth most populous country in the world.

Taking into account the large and increasing number of migrants, in 2000 the UN General Assembly proclaimed 18 December as International Migrants Day. The choice of date marks the day on which the Assembly adopted, in 1990, the treaty known as the International Convention on the Protection of the Rights of All Migrant Workers and Members of Their Families.

In their joint statement, the human rights experts said that even though migrants have contributed greatly to societies around the world, millions of them are victims of discrimination, xenophobia and a myriad of violations against their human rights – simply for being migrants.

“It is because of this that today, on International Migrants Day, we reaffirm that human rights are rights for all persons,” they said. “In this sense, a real commitment by States regarding the human rights of migrants requires the full recognition of migrants as rights holders. Human rights are derived from human dignity and not from national origin or migratory status.”

According to the experts, measures that criminalize irregular migration include the enactment of laws that penalize migrants in an irregular situation and persons that assist migrants; the use of excessive and disproportionate force during migration control operations; the detention of migrants in an irregular situation; deportations without procedural guarantees; and also xenophobic statements in which authorities and the media encourage the stigmatization of migrants.

“In addition to being contrary to human rights and increasing the vulnerability of migrants, these measures have not been proven effective in deterring irregular migration,” the experts said.

In relation to their concern over the increasing use by some countries of detention against migrants, the four experts noted that “this situation is of even greater concern” because detention is often applied to children.

“Respect for the right to liberty and security of person implies that liberty is the rule and detention, the exception. States have the obligation to establish a presumption in favour of liberty in domestic law,” they said, adding the automatic, mandatory or punitive use of migrant detention violates migrants' right to liberty, as well as the human rights of others.

“The exceptionality of administrative detention of migrants also applies to asylum seekers, refugees, stateless persons and other persons in need of international protection,” they said in their joint statement. “We call on States to gradually abolish the administrative detention of migrants and establish alternative measures to detention, applying a human rights-based approach.”

In addition, the four experts called on States to ratify the International Convention on the Protection of the Rights of All Migrant Workers and Members of Their Families, as well as other international and regional human rights treaties.

“In parallel to ratifying these instruments, States should guarantee that their policies, laws and practices on migration conform to their international human rights obligations,” they added.

UN independent experts, or special rapporteurs like Mr. Crépeau, are appointed by the Geneva-based Council to examine and report back on a country situation or a specific human rights theme. The positions are honorary and the experts are not UN staff, nor are they paid for their work.

Headed by Mr. El Jamri, the CMW is a body of 14 independent experts that monitors the protection of the rights of all migrant workers and members of their families, as laid out in the International Convention. It meets in Geneva and normally holds two sessions per year. 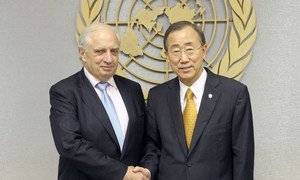 Addressing a global summit on international migration today, the top United Nations official on the matter called on world leaders to target achieving “real results” on a series of migration-related challenges when the UN General Assembly holds a key meeting on cross-border movements next year.