17 December 2012
Returning to his usual office for the first time since the United Nations Headquarters’ major restoration project began almost five years ago, Secretary-General Ban Ki-moon today expressed excitement for the “historic” and eco-friendly renovations which have revamped the 60-year old Secretariat building.

“Today marks a major step in the United Nations Secretariat’s renewal,” Mr. Ban told reporters at a media encounter held in his renovated office on the 38th floor of the building, a key part of the world body’s headquarters complex located in New York City.

“Now we have modern and eco-friendly systems,” he continued, adding that with the renovation, the UN could “better serve the world’s people.”

The UN chief had been working out of a temporary office space located elsewhere at the world body’s headquarters complex, which is spread out over 6.9 hectares, and includes six buildings totalling about 241,547 square metres.

The original UN structures were built between 1950 and 1952, and had aged considerably and lacked the standards that are expected in a modern and safe building. The refurbishment – which still continues for some structures and ends in 2014 – aims to replace deteriorated systems, meet current building codes and standards for safety, security and accessibility for persons with disabilities, and to improve its environmental performance.

With an overall 50 per cent reduction in energy and water consumption and 40 per cent decrease in carbon production, the entire renovation project – known formally as the Capital Master Plan and budgeted at close to $2 billion – is expected to render the UN Secretariat one of the greenest and cleanest buildings in the world.

Moreover, the landmark 39-storey building towering over the East River and First Avenue in Manhattan will possess the 21st century trappings of eco-friendly energy conservation. Other touches include the Secretariat’s glass façade – made dull by weather conditions over the years – which has been replaced with a new glass curtain with the same bluish-green tint as in its first incarnation in 1952.

Addressing the various inconveniences caused by the renovation project, the Secretary-General thanked the world body’s staff for their flexibility and patience over the past years and encouraged them to employ the facilities of the high-tech building in their work.

“As we re-occupy the Secretariat renovated with state-of-the-art technology, I am sure that we will meet the expectation of working even harder,” Mr. Ban said while promising continuing improvements regarding the UN’s environmental impact.

“And I sincerely hope that all our staff members will fully utilize this beautifully renovated Secretariat building,” the UN chief added.

Mr. Ban also thanked UN Member States and, in particular, the Secretariat’s host country, the United States, and host city, New York, for their support for the renovation project.

“We will never take this gift for granted,” he said. “We will do our best to meet the expectations of the international community by improving our performance.” 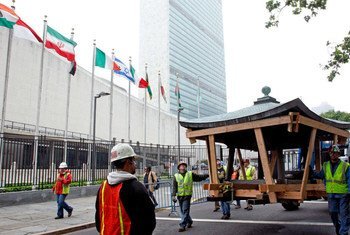 31 March 2011
Nearly three years into the major renovation of the United Nations Headquarters complex in New York, the project is on track to being completed within its almost $2 billion budget, the official overseeing the overhaul said today.