MONUSCO/Sylvain Liechti
Armed group of M23 make their withdrawal from the city of Goma, DRC.
17 December 2012

The situation on the ground in the Kivus – two provinces in the eastern Democratic Republic of the Congo (DRC) which have experienced violent clashes and civilian displacement involving armed groups over recent months – remains “tense and fragile,” a United Nations spokesperson said today.

Speaking to the UN News Centre, the spokesperson for the UN Department of Peacekeeping Operations (DPKO), Kieran Dwyer, also said that ‘blue helmets’ from the UN Organization Stabilization Mission in the DRC (MONUSCO) have received reports of fighters with the 23 March Movement (M23) armed group around the city of Goma, the capital of North Kivu province.

“Over the weekend, MONUSCO stepped up ground patrols and air reconnaissance flights in response to these reports,” Mr. Dwyer said.

“While many of the reports could not be confirmed, MONUSCO was able to confirm the presence of M23 elements in several locations in North Kivu, including near Rwindi, Kibati and in the Masisi area near Moja,” he added.

The spokesperson noted that such movements are “in breach of Security Council resolution 2076” and that MONUSCO’s peacekeepers continue with their frequent patrols in and around Goma.

Adopted by the Council in late November, resolution 2076 demanded the immediate withdrawal of the M23 from Goma and the cessation of any further advances, in addition to calling for a clarification of reports of external support provided to the group and stating its readiness to act on the basis of information received, amongst other points.

The armed group – made up of former national army troops who mutinied in April and named after a 23 March 2009 peace agreement that they reportedly say has not been implemented – occupied Goma on 19 November, after an advance that included clashes with the DRC armed forces, known by the French acronym FARDC, which received support from MONUSCO.

The advance displaced more than 130,000 people in and around Goma, and sent another 47,000 fleeing to neighbouring South Kivu province. Many of those uprooted from their homes are currently living either with host families, or in camps and spontaneous sites, or in public buildings.

Amidst widespread condemnation and calls for their withdrawal, the M23 fighters pulled out – while monitored by MONUSCO peacekeepers – from the city of one million after 11 days, in accordance with requirements laid out by the regional intergovernmental group known as the International Conference on the Great Lakes Region (ICGLR).

MONUSCO has 6,700 and 4,000 troops in the provinces of North and South Kivu, respectively, including, in some places, behind the M23 lines. North Kivu alone is four times the size of Belgium. 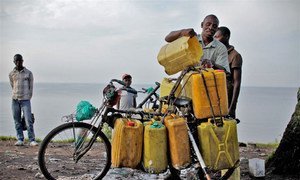