The Office of the United Nations High Commissioner for Refugees (UNHCR) today warned of serious shortcomings at an offshore processing centre on the South Pacific island nation of Nauru to which Australia sends asylum-seekers.

During a monitoring mission to Nauru from 3 to 5 December, UNHCR found that although efforts are under way to improve the facilities, current arrangements there do not meet international protection standards.

Members of the mission, whose report was released today in the Australian capital, Canberra, met Nauruan officials to discuss the country’s obligations under the 1951 Refugee Convention. They also visited the regional processing centre to review reception conditions, and spoke to asylum-seekers, service providers and officials of the Australian Department of Immigration and Citizenship (DIAC).

“What UNHCR found was a lack of clarity as to the legal and operational roles and responsibilities of the two State parties involved in the transfer arrangements,” said Mr. Edwards.

“Despite the evident commitment and work of both Australian and Nauru officials, including the establishment by the Government of Nauru of a legal framework for processing asylum claims, considerable and important work remains to be done to establish a functional system for refugee status determination.

“The current lack of clear and effective processing arrangements for asylum-seekers may be inconsistent with the purpose of the transfers, namely to undertake refugee processing in a fair, humane, expeditious and timely way.”

The UNHCR team described the conditions at the detention centre as “harsh,” with little natural shelter from the heat during day. These conditions are aggravated by significant noise and dust from the construction of the permanent facility.

The team also found a number of transferred asylum-seekers who are suffering from pre-existing trauma, some of them being survivors of torture, raising questions about the capacity of health providers on Nauru to adequately address such specific needs and about the effectiveness of the pre-transfer assessments undertaken by Australian authorities prior to selection and transfer.

“UNHCR fears that the current uncertainty about responsibilities for different aspects of processing and on-going delays in the commencement of such processing are together and over time likely to have a significant and detrimental impact on the mental and physical health of asylum-seekers transferred from Australia to Nauru,” Mr. Edwards stated. “Unless these issues are addressed without delay, the impact is likely to be exacerbated by the unsatisfactory reception conditions within the detention settings of the processing centre on Nauru.”

The mission’s report recommends the need for more information and clarity for asylum-seekers about their situation, and counselling on the procedures and time frames of various steps in line with international standards.

Asylum-seekers should also be provided with adequate conditions of accommodation, and the legal framework, rules and procedures for processing of transferred asylum-seekers in Nauru should be completed as a matter of urgency, the team stated.

“Our report also calls for review of pre-transfer assessments in Australia to ensure that these fully take into account vulnerabilities of individuals who may have suffered torture or trauma,” said Mr. Edwards.

He added that UNHCR’s preference has always been an arrangement which would enable all asylum-seekers arriving by boat into Australian territory to be processed in Australia, consistent with general practice.

The first transfers of asylum-seekers from Australia to Nauru took place in mid-September. So far, more than 400 people have been transferred. Between January and October this year 12,279 people sought asylum in Australia. 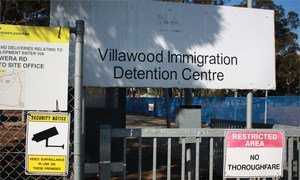 A senior United Nations official today warned that the re-opening of offshore detention centres for migrants and asylum-seekers arriving in Australia by sea could result in violations of human rights, and called on its Government to rethink the country’s asylum and migration policy.