Noting that women have not benefited equally from progress made in achieving the anti-poverty targets known as the Millennium Development Goals (MDGs), a senior United Nations official today highlighted the need for more to be done to achieve gender equality and the empowerment of women.

“Poverty continues to have a female face,” said the Under-Secretary-General for Economic and Social Affairs, Wu Hongbo. “All of us have a duty to change this. All of us have a role in bringing about that change. Women are important agents of development, but they will only be able to serve as agents of development if they have an environment that enables their full potential.”

“Looking ahead,” he added, “we must ensure that gender equality and the empowerment of women are at the centre of a post-2015 global development agenda.”

Taking place in the Austrian capital, the two-day gathering has brought together senior representatives, experts from national and local governments, civil society organizations, parliaments, women’s organizations and the private sector, as well as representatives of international organizations, to develop concrete policy recommendations to advance gender equality and the empowerment of women in response to shifts in international development cooperation and in the world body’s evolving development agenda for after 2015.

The two-day gathering is also the first in a series of consultations in preparation for the 2014 Development Cooperation Forum (DCF), which is the principal multi-stakeholder platform for global dialogue and policy aimed at reviewing trends and progress, as well as providing policy guidance and recommendations, in international development cooperation.

In his remarks, Mr. Wu said that the international community, as a whole, has made great strides towards the achievement of the MDGs in spite of the economic and financial crisis that continues to beset much of the world, adding that it is now widely recognized that achieving gender equality and the empowerment of women is a sine qua non for the achievement of all of the MDGs.

“Yet women have not benefited equally from past progress,” the UN official said. “They continue to face discrimination in access to education, work and economic assets. Women’s participation in decision making at all level remains far from adequate. Violence against women continues to undermine efforts to empower women and to ensure respect for their equal rights.”

With the achievement deadline of 2015, the eight MDGs were agreed on world leaders at a UN summit in 2000. They seek to end poverty and hunger, achieve universal primary education and boost maternal health, amongst other aims. The MDGs included gender equality and the empowerment of women, both as a stand alone goal, and in terms of targets and indicators, with half of the MDGs having gender-related targets.

Although several MDGs have been met ahead of schedule, including on poverty reduction, water access, slum improvement and gender parity in primary education, enormous challenges remain – more than one billion people are still living in extreme poverty and approximately 61 million children of primary school age are out of school. Progress has been uneven within countries and regions and severe inequalities persist.

The first lesson, he noted, echoed suggestions that a post-2015 development agenda should build on the achievements and lessons learned of the MDGs, adding that “many see this twin track approach as critical in generating political support and the necessary financial backing for the empowerment of women.”

The second lesson is that a future development agenda must address the underlying economic, social and cultural drivers of gender inequality.

“To pave the way for the transformational change needed, we must vanquish stereotypical attitudes that perpetuate gender inequality. One concrete way is to support gender mainstreaming in macroeconomic policy making,” the Under-Secretary-General said. “This can be done through increased reliance on gender responsive budgeting and planning processes – this would, in turn, help to advance a gender-responsive global partnership for development.”

Mr. Wu said that the third lesson is that a future development agenda must be grounded on a “strong mutual accountability framework” that can help actors to hold each other to account for commitments made on gender equality and the empowerment of women.

“Today, the potential of mutual accountability mechanisms for the advancement of gender equality and the empowerment of women remains largely untapped,” he said. “We must address this gap moving ahead.”

♦ Receive daily updates directly in your inbox - Subscribe here to a topic.
♦ Download the UN News app for your iOS or Android devices.
women|gender 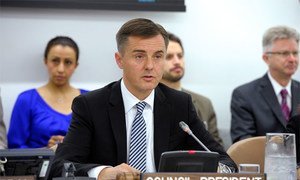 A United Nations forum on development cooperation today ended for a call for increased collaboration and accountability among countries, and incorporation of sustainability objectives.