12 December 2012
A senior United Nations official today concluded a visit to the Central African Republic (CAR) – her first mission abroad since her appointment – with the announcement of two agreements on conflict-related sexual violence with stakeholders in the country’s peace process.

“I have made the Central African Republic my first visit, because I want to draw attention to the situation and make sure that the world and the international community does not forget about CAR,” said the Secretary-General’s Special Representative on Sexual Violence in Conflict, Zainab Hawa Bangura.

“We want to take forward our cooperation with CAR,” she added. “I sincerely hope and believe that both the Joint Communiqué with the Government and specific commitments by armed groups will serve as a good tool in this respect.”

In addition to focussing greater international attention on the situation in the CAR, the aim of the envoy’s visit was to gain first-hand knowledge of the challenges involved in addressing conflict-related sexual violence there.

The first of the agreements signed by Ms. Bangura and her hosts – called the Joint Communiqué of the Government of the Central African Republic and the United Nations – includes commitments to fight impunity for crimes of sexual violence; ensure the protection of women, boys and girls from sexual violence in the context of an effective monitoring of the peace agreement; and, provide greater support to survivors.

One of the key points of the second agreement – the so-called Joint Communiqué of the Disarmament, Demobilization and Reintegration Steering Committee, which is made up of representatives of the Government, armed groups, the United Nations, and other members of the international community – is the requirement that political-military groups immediately release vulnerable individuals such as women and children.

The CAR has a history of political instability and recurring armed conflict. State authority is weak in many parts of the country, which are largely controlled by rebel groups and criminal armed groups, according to the UN Department of Political Affairs (DPA).

According to a news release from the UN envoy’s office, conflict-related sexual violence in CAR is also a significant problem. Sexual violence has been reported more often in areas controlled by political-military groups and where other armed forces and bandits are active. There are also serious concerns about foreign armed groups, in particular the LRA and Chadian armed groups.

During her visit, the Special Representative met with President François Bozizé, with the Prime Minister and other members of Government, as well as with survivors of sexual violence, women’s groups and with female members of parliament. She also visited two regions outside of the capital – Bria and Paoua.

“Women in Bria and Paoua told me they want peace and security, for the armed groups to be disarmed, and for women and children to be released. They have had enough of war and violence, and recognize that in the absence of peace they cannot repair their livelihoods and rebuild their lives,” Ms. Bangura said.

In the news release, the UN official’s office also noted that it is also clear that the victims and survivors of rape and other forms of sexual violence do not want to talk about what they have been subjected to. It observed that the culture of stigma, silence and denial surrounding this issue is acute and tends to discourage survivors from seeking help, even where services exist.

“It is not the women who have been abused who should feel ashamed, but the perpetrators,” Ms. Bangura said. “That is why we must fight impunity for all crimes of sexual violence in CAR. We will make sure that perpetrators are held accountable, and have no place to hide. We will go after them with all our means.”

Ms. Bangura was appointed to her position in June this year. 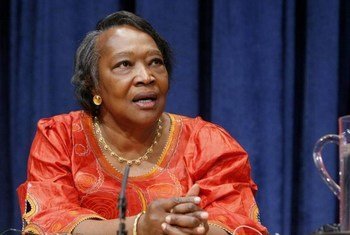