Students at a school in Kurdistan, Iraq. WFP/Abeer Etefa
12 December 2012

The most comprehensive survey on the situation of women and children in Iraq shows that 32 per cent of children under the age of 18 are deprived of many basic services, the United Nations Children’s Fund (UNICEF) said today.

The survey, launched today by the Government of Iraq and UNICEF, states that “major” disparities exist in terms of access to health care and nutrition, education, water and sanitation, protection, shelter, and information services, according to a UNICEF news release.

It also found that 99 per cent of children are currently registered at birth; the mortality rate of children dying in the first year of life is 32 deaths for every 1,000 live births, which translates into around 35,000 infant deaths every year; and one in four children have stunted physical and intellectual development due to under-nutrition.

Also, while about 9 out of 10 children enrol in and attend primary school, only four complete primary school on time; and 1 in 3 children – 3.3 million – are subjected to severe violent discipline methods.

“With this clear evidence on where progress for Iraqi children can be made, UNICEF looks forward to supporting the Government to develop national social policies, plans and interventions that concretely meet the needs of all of Iraq’s children, especially the 5.3 million most deprived and marginalized,” said UNICEF’s Representative to Iraq, Marzio Babille.

“In line with international commitments and accountabilities, our ambitious goal going forward is for an Iraq that is fit for all children,” the UN official added.

According to UNICEF, Iraq’s Minister of Planning, Ali Yousif Al-Shukri, noted that the survey provides extensive data on the situation of women and children in Iraq.

“With these findings,” he said, “we clearly see where we need to focus our investment in the new development plan to further improve the well-being of Iraqi children, who, representing half of Iraq’s population today, represent Iraq’s future tomorrow.” 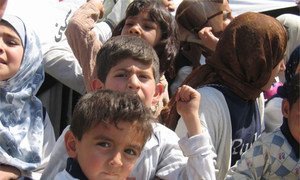 The United Nations today reaffirmed its commitment to protect and promote the rights of 16 million Iraqi children, on the occasion of the Day of the Iraqi Child, which commemorates the deaths of dozens of children who were killed by a car bomb on 13 July, 2005.