A United Nations official today urged an immediate halt to violence against children in Thailand’s restive southern provinces, where an 11-month-old girl was among five people killed in an attack this week.

“Every time a child is killed or injured, every time a child loses a parent or relative, and every time their schools and teachers are attacked, the more all children in the deep south suffer,” said the representative of the UN Children’s Fund (UNICEF) in Thailand, Bijaya Rajbhandari.

“Bringing an end to the violence is the only way to ensure that the rights of all children in the south are fully protected and respected,” he added in a news release.

According to UNICEF, the infant girl, Infani Samo, was killed early Tuesday morning when gunmen armed with automatic weapons sprayed gunfire into a tea house in the Rangae district of Narathiwat province.

Mr. Rajbhandari described the killings as “a tragic, senseless and unacceptable act” and called upon all parties involved “to use every means at their disposal to end the violence and ensure that all children are protected from it.”

In late October, an 11-year-old boy was slain along with his father when gunmen fired upon their pickup truck in Yala province’s Raman district.

Thailand’s southern provinces have been plagued by bomb attacks and shootings since 2004, when a separatist campaign reignited. UNICEF notes that more than 50 children have been killed and some 340 injured in the region since the resurgence of violence. In total, more than 5,000 people have lost their lives as a result of the violence. 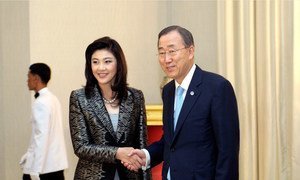 Secretary-General Ban Ki-moon has strongly condemned deadly car bombings in the southern Thai provinces of Songkhla and Yala over the weekend, which reportedly killed at least 13 people and injured hundreds more.