The UN Central Emergency Response Fund (CERF) is one of the world’s largest sources of humanitarian funding. Since 2006, the Fund – managed by the UN Office for the Coordination of Humanitarian Affairs (OCHA) – has enabled the fast delivery of life-saving assistance to people affected by natural disasters and other crises in 87 countries and territories.

Addressing the annual high-level conference on the CERF, held at UN Headquarters in New York, Secretary-General Ban Ki-moon thanked everyone who makes it possible for the Fund to save lives and highlighted the many ways in which it makes a difference.

“From flood zones to war zones, CERF stops crises from turning into catastrophes,” he stated. “The Fund does this through quick, targeted support when an emergency starts or by injecting funds in stubbornly under-funded situations.”

This year alone, CERF allocations totalling some $465 million have made it possible to deliver humanitarian aid to 49 countries, including Syria, South Sudan, Haiti and Pakistan. It is the highest amount that has ever been allocated in a calendar year.

While the UN focuses on a range of activities from conflict prevention and mediation to action on climate change and human rights protection, its work cannot prevent all disasters, noted the Secretary-General.

“They are a fact of life in our world,” he said. “And emergencies are getting worse – more intense, more widespread and more frequent.”

“CERF is not just an acronym for a multi-million dollar fund,” Mr. Ban added. “It is the vaccine that saves a child from yellow fever… or his mother from meningitis. It is the blanket that covers a refugee family when temperatures drop below freezing. It is the sanitary supply that allows a young girl to go to school with confidence and dignity…

“CERF is more than a message from the international community – it is real help for the most vulnerable members of our human family.”

At the conference, the Under-Secretary-General for Humanitarian Affairs and head of OCHA, Valerie Amos, highlighted how the Fund has been used to assist those affected by the crisis that began in Syria last year, to ensure that people affected by communal violence in South Sudan receive life-saving assistance, and was in the frontline of the response in Haiti and Cuba following Hurricane Sandy.

“The rapid and flexible support offered by the CERF makes it a central pillar of the UN agencies’ humanitarian response,” she told the attendees, made up of representatives from Member States, UN agencies, public and private donors and civil society.

“The CERF has demonstrated its added value this year,” she noted. “We were able to do this because of the very generous support of the 84 Member States and many others who provided $459 million in 2011 and more than $405 million so far this year.”

“In both years, more than 60 per cent of the pledges were turned into contributions by the end of the first quarter, giving us the funds we needed to respond to emergencies from the beginning of the year,” stated Ms. Amos, who is also the UN’s Emergency Relief Coordinator. “Because of this generous support, we were able to critically assess each request that came to us. And we will need your continued support if we are to respond to the difficult challenges ahead.”

The conference also featured a presentation by the Regional Humanitarian Coordinator for the Sahel, David Gressly, who discussed the ways in which the CERF has been used to strengthen the humanitarian response to the complex crisis affecting parts of the African region.

The western part of the Sahel – which stretches from the Atlantic Ocean to the Red Sea, and includes Chad, Mali, Mauritania, Niger, and parts of Sudan, Cameroon and Nigeria – suffers from extreme poverty, with human development levels among the lowest in the world, porous borders that present significant security challenges, as well as human rights problems. Political instability in Mali has exacerbated the region’s challenges.

“CERF allocations were among the first funds received for the Sahel crisis when early warning alerts were issued in 2011,” Mr. Gressly said. “It helped jump-start the response and fill the gaps in areas that were underfunded like agriculture, health and nutrition. CERF helped demonstrate the UN’s commitment to support the Governments’ efforts to respond to the crises.” 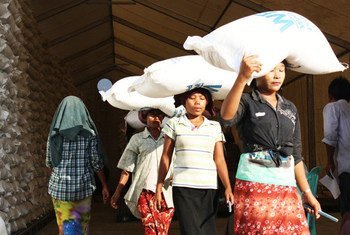 27 November 2012
Some 36,000 people who have been displaced by inter-communal violence in Myanmar’s Rakhine state will benefit from an additional $5.3 million in assistance provided by the United Nations Central Emergency Response Fund (CERF), the world body announced today.