“The murder of Nadia Sadiqi is unacceptable. On Human Rights Day, I see this as a stark reminder to us all that the fight for human dignity and fundamental freedoms must remain our number one task,” said the Director-General of the UN Educational, Scientific and Cultural Organization (UNESCO), Irina Bokova.

“Afghanistan is struggling to become a peaceful and just society,” she added. “We cannot let violence derail that vital task.”

Ms. Sidiqi – the acting Director of the Women's Affairs Department in the east Afghan province of Laghman – was reportedly shot and killed by two unidentified gunmen while on her way to work on a motorised rickshaw earlier Monday, which is also Human Rights Day.

“The rights of girls and women are keys to a better and stronger future for Afghanistan, as well as for the prosperity and openness of its society,” said the Executive Director of the UN Entity for Gender Equality and the Empowerment of Women (UN Women), Michelle Bachelet. “This violence is an appalling human rights violation that threatens democratic governance.”

The former President of Finland, Tarja Halonen, joined the two UN officials in condemning the attack, describing it as “an attack against the positive change that is underway” in the Central Asian nation.

“We support the Government of Afghanistan in bringing those who are guilty of this crime to justice and in developing stronger policies to advance human rights and fundamental freedoms, especially for women,” Ms. Halonen said.

The three women leaders were at UNESCO Headquarters in Paris for a high-level advocacy event, ‘Stand up for Malala – Stand up for girls’ right to education!’ organized by UNESCO and the Government of Pakistan. 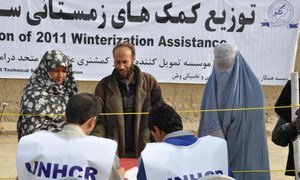 The United Nations refugee agency has begun distributing winter aid to some 40,000 families which are at risk in the cold weather in remote areas of Afghanistan, as well as the capital, Kabul.