United Nations officials today marked Human Rights Day by declaring that everyone has the right to be heard and to shape the decisions that affect their lives and communities.

United Nations officials today marked Human Rights Day by declaring that everyone has the right to be heard and to shape the decisions that affect their lives and communities.

“International law is clear: No matter who you are, or where you live, your voice counts,” Secretary-General Ban Ki-moon said in his message for the Day, observed annually on 10 December. “On this Day, let us unite to defend your right to make it heard.”

This year’s theme for the Day, which is being observed through numerous events around the world, is ‘Inclusion and the Right to Participate in Public Life.’

In his message, Mr. Ban noted that there has been “undeniable” progress over the past century along the path of inclusion. However, far too many groups and individuals face obstacles, including women, indigenous peoples, religious and ethnic minorities, people with disabilities or those with a different sexual orientation or political opinion.

“These are not just nice ideas,” the UN High Commissioner for Human Rights, Navi Pillay, stated in her remarks to a Human Rights Day event in Geneva, referring to this year’s theme.

“Millions of people have gone on to the streets over the past few years, some demanding civil and political rights, others demanding economic, social and cultural rights,” she said. “This groundswell is not simply a question of people demanding freedom to say what they think.

In a separate statement for the Day, Ms. Pillay saluted all those who have suffered so much seeking what is rightfully theirs, saying that “we have a voice, we have our rights and we want to participate in the way our societies and economies are run.”

The voices of too many women and girls, in particular, continue to be stifled through discrimination, threats and violence, the Executive Director of the UN Entity for Gender Equality and the Empowerment of Women (UN Women), Michelle Bachelet, said in her message for the Day.

“This is holding back progress for women and for all members of society,” she stated. “Women’s participation is fundamental for sustainable development, peace and democracy. It is time to remove the barriers to women’s full and equal participation in the economy, in politics and in all aspects of public life.”

Commenting on the Day, the UN peacekeeping chief noted how human rights are “at the heart” of the work carried out by the world body’s ‘blue helmets.’

“Human rights teams are integrated into our large peacekeeping missions – they are focussed on protecting and promoting human rights in countries emerging from conflict and histories of large scale abuses,” said the Under-Secretary-General for Peacekeeping Operations, Hervé Ladsous.

“Just as importantly, they help build national capacities and institutions so that the people of these countries can work to protect and promote human rights for the long term,” he added.

The human rights components of UN peacekeeping missions work in close cooperation and coordination with other civilian and uniformed components of peace operations, particularly in relation to the protection of civilians, addressing conflict-related sexual violence and violations against children, strengthening respect for human rights and the rule of law through legal and judicial reform, security sector reform and prison system reform.

As part of today’s celebration, the UN Educational, Scientific and Cultural Organization (UNESCO) is holding a high-level event at its Paris headquarters in support of girls’ education, with a special tribute to Malala Yousafzai, a 15-year-old girl who was shot by the Taliban in October for her efforts to defend the education of girls in her native Pakistan.

‘Stand up for Malala – Girls’ education is a right’ aims to accelerate political action to ensure every girl’s right to go to school, and to advance girls’ education as an urgent priority. Speakers include UNESCO’s Director-General, Irina Bokova, Pakistani President Asif Ali Zardari and the UN Special Envoy for Global Education, Gordon Brown.

“Whenever and wherever a young girl is forbidden from going to school, it’s an attack against all girls, against the right to learn, the right to live life to the full; and it is unacceptable,” Ms. Bokova stated last month in support for Malala, who is recovering in a hospital in the United Kingdom.

UNESCO and the Government of Pakistan launched the Malala Fund for Girls’ Education at the event, with President Zardari announcing that his country would donate the first $10 million. In addition, participants adopted a Statement of Commitment to Girls’ Rights to Education, promising “to actively strive to make every effort to end all forms of violence against girls and to eliminate the obstacles that prevent them from attending school.”

Observances for Human Rights Day also include a special event at UN Headquarters in New York on Tuesday on the role of leadership in the fight against homophobia, which is organized by the Office of the UN High Commissioner for Human Rights (OHCHR) and a number of permanent missions to the UN as well as international human rights organizations. 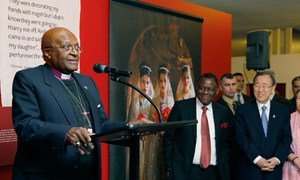 Nobel Peace Prize Laureate and activist Archbishop Emeritus Desmond Tutu will be honoured for his contribution to building a universal culture of human rights around the world, the UN Educational, Scientific and Cultural Organization (UNESCO) announced today.