IRIN/Jessica Hatcher
A man loads water collected from Lake Kivu onto his bicycle for sale in Goma, DRC, where municipal supplies have been interrupted.

9 December 2012
While relief workers in the Democratic Republic of the Congo (DRC) have scaled up assistance to those affected by the recent violence in Goma, the protection of civilians remains a major concern, said a senior United Nations official who toured the area.

“I am grateful to the humanitarian actors who stayed in Goma and continued to deliver aid to the most vulnerable populations during the peak of the crisis,” the Humanitarian Coordinator in DRC, Moustapha Soumaré, said during a visit to Goma on Saturday.

Mr. Soumaré toured North Kivu's provincial capital to gain first-hand information on the humanitarian situation and the protection of civilians following the recent fighting between the Congolese national army (FARDC) and the M23 armed group.

The clashes displaced more than 130,000 people in and around Goma, and sent another 47,000 fleeing to neighbouring South Kivu province. Many of those uprooted from their homes are currently living either with host families, or in camps and spontaneous sites, or in public buildings.

Mr. Soumaré noted that, since the lull in fighting in North Kivu, humanitarian workers have scaled up their interventions to respond to the urgent needs of thousands of people by providing food, potable water, health and other essential services and commodities.

“However, our primary concern remains the protection of civilians throughout the province which remain highly unstable,” he stated in a news release.

“Without minimal security guarantees, it is difficult for us to work. We want to avoid at all cost that the aid we deliver will not expose the beneficiaries to attacks by armed elements,” he said.

The IDPs Mr. Soumaré spoke with stressed the urgent need to re-establish security in their home areas to facilitate their return. While acknowledging the life-saving assistance that they have received so far, they pled for additional aid.

Meanwhile, daily life is slowly resuming in Goma in a “highly unpredictable climate,” according to the news release. The airport, which was closed for two weeks, has re-opened – a significant development for the humanitarian response, notably in terms of shipping aid and transporting personnel.

Mr. Soumaré used the trip to Goma to airlift several tons of medicine and therapeutic milk that will be used to treat some 30,000 people during one month and malnourished children. Numerous schools remain closed as they have been looted or are occupied by displaced families.

The M23 occupied Goma for 11 days last month and then withdrew in accordance with requirements laid out in a communiqué issued by the regional intergovernmental group known as the International Conference on the Great Lakes Region (ICGLR). 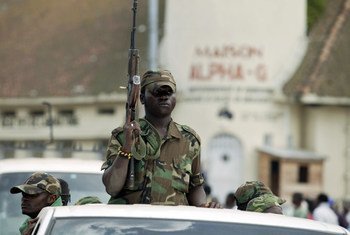 5 December 2012
The security and humanitarian situation in the Kivu provinces in eastern Democratic Republic of the Congo (DRC) remains fragile, a United Nations spokesperson said today, adding that the world body is continuing to assist the country on both fronts.