On a visit to Myanmar, the top United Nations relief official said today the UN’s humanitarian arm is seeking the Government’s permission to access people driven from their homes in parts of the country’s north, in addition to asking for international donor support for people displaced by ethnic inter-communal violence in the west.

“For almost six months now, the UN has not been able to provide assistance to almost 40,000 people as we are not permitted to go to KIA-controlled areas,” the Under-Secretary-General for Humanitarian Affairs, Valerie Amos, told a news conference, using the acronym for the Kachin Independence Army, which operates in the states of Kachin and Shan in Myanmar’s north.

“Local partners are providing food and other assistance, but their stocks are depleted, and, with the winter months approaching, getting more supplies in is critical,” Ms. Amos added, according to a news release from the UN Office for the Coordination of Humanitarian Affairs (OCHA), which she also heads.

Some 75,000 people have been forced from their homes in Kachin and Shan since fighting began in June 2011 between Government troops and rebels.

Ms. Amos said the UN has substantial experience working in insecure environments, and so had “asked the Government to give us permission to travel to (the off-limits) areas and provide the aid that is so badly needed.”

“We are working in other countries where the security situation is much worse,” she added.

The humanitarian official noted the 700 inhabitants of a camp she visited in a Government-controlled area outside Myityina, Kachin’s capital, were receiving regular assistance from aid organizations.

Ms. Amos was on her last day of her Myanmar visit after arriving on 3 December to assess humanitarian needs throughout the country. She was accompanied by the Myanmar Minister of Border Affairs, Lieutenant General Thein Htay, on her visits, and met with several Government officials, including President Thein Sein, whom she said she was also “pursuing a durable ceasefire in Kachin.”

In addition to visiting Kachin, Ms. Amos also visited Rakhine state on Myanmar’s west coast. Inter-communal ethnic violence throughout Rakhine this year has left 115,000 people displaced, as well as more than 100 dead, according to UN estimates.

On Rakhine, Ms. Amos repeated an appeal she issued on Wednesday for Myanmar’s leaders to support UN and other humanitarian efforts there.

“There is a loss of trust and I believe the Government must play a critical role in reconciliation,” Ms. Amos said. “Local leaders need to speak out and explain that they have asked us to be there to help.”

Ms. Amos also said inadequate funding was impeding aid delivery in Rakhine. She highlighted that $41 million of $68 million needed to help the 115,000 displaced people in the State for nine months remained outstanding. OCHA said the figures were drawn from the latest Rakhine Response Plan of the humanitarian community in Myanmar.

“The level of assistance provided in the different camps varies significantly,” Ms. Amos said, adding that she saw new houses being built in at least two communities, but, in a camp she visited in the town of Myebon, “thousands of people (were) in shockingly overcrowded, substandard shelter, with poor sanitation.”

Expressing concern for the future of people in camps she visited elsewhere in Rakhine, Ms. Amos said, “Children have been out of school for up to six months, the men are not able to provide for their families, and there is a general sense of hopelessness.”

The OCHA head also commended President Sein on “his recent pledge to enact a range of measures,” related to the inter-communal strife in Rakhine. These included addressing the question of citizenship for people without nationality in the state.

In a media briefing in Geneva today, a spokesperson for the Office of the UN High Commissioner for Refugees (UNHCR), said that the agency advocates granting citizenship to people displaced without nationality in Rakhine.

For its part, UNHCR has distributed relief supplies to almost two-thirds of the affected communities in Rakhine, the agency’s spokesperson, Adrian Edwards, told the Geneva briefing.

“We are working with the Myanmar authorities on awareness of proper standards for safe and voluntary return when the right conditions are in place,” he said.

UNHCR is targeting “both affected communities based on their needs,” Mr. Edwards added, noting that, to date, the agency had given out plastic sheets, blankets, kitchen sets and other supplies to 70,000 people, with more on the way.

“There are still areas in the Rakhine State that are hard to reach due to their remote location and continuing tensions,” Mr. Edwards said. He also highlighted that the refugee agency had received “less than 30 per cent of the $24.35 million we need to care for the displaced people… until June next year.” 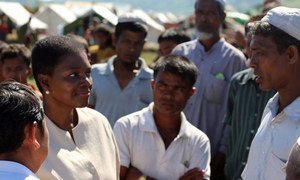 The United Nations humanitarian chief today called on the Government of Myanmar to work with the world body and its partners to increase efforts to address the humanitarian issues that are causing continued instability in the country.