7 December 2012
Amidst a visit to a Turkish refugee camp for people displaced by the ongoing violence in neighbouring Syria, United Nations Secretary-General Ban Ki-moon today appealed once more to all sides in the conflict to stop the killing, according to his spokesperson.

“And he pleaded for more funds for humanitarian assistance, at a time when the Syria Humanitarian Assistance Response Plan is only 50 percent funded,” his spokesperson added in a news briefing at UN Headquarters in New York, referring to the plan which currently seeks $348 million to cover humanitarian relief activities inside Syria, but has so far received $157 million.

The UN chief spent much of Friday visiting camps in Jordan and Turkey where Syrian refugees have sought safety from the violence in their home country, where at least 20,000 people, mostly civilians, have been killed since the uprising against President Bashar al-Assad began some 21 months ago. The violence has spawned more than 465,000 refugees, while more than 2.5 million people are in need of humanitarian assistance, according to UN estimates.

Secretary-General Ban first saw the Za’atri camp in Jordan, where he also visited a food distribution centre run by the UN World Food Programme (WFP) and a playground for children run by the UN Children’s Fund (UNICEF). He later travelled to Turkey’s Islahiye camp, where he visited a tent city and spoke with some residents there.

“In remarks to the press following his visits to the camps, the Secretary-General said he was shocked, humbled and deeply moved by the stories that families shared with him,” his spokesperson said. “He recalled one child who simply told him he wanted to go back to school.”

Mr. Ban also urged the international community to show solidarity with the people of Syria, noting that the people he met today are mothers, brothers, fathers and sisters, describing them as “our family” and calling for the world to “stand by them.”

The spokesperson added that while in Turkey the Secretary-General will also meet with the country’s President and Prime Minister, as well as the Foreign Minister, before returning to New York on Saturday.

They exchanged views on the crisis in Syria and its implications for neighbouring countries. Mr. Ban thanked Turkey for hosting thousands of Syrian refugees and assured the Turkish Government of the world body’s continued partnership in providing humanitarian assistance.

In addition, the four men discussed developments in the Middle East, including prospects for the Middle East peace process, and the situation in Somalia. The Secretary-General also underscored the importance of Turkey’s role in finding a durable solution to the issue of Cyprus. 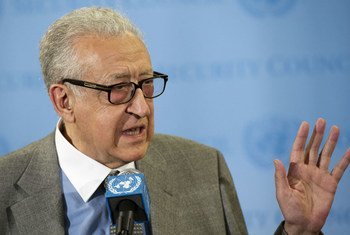 6 December 2012
The urgent need to initiate a political process to help resolve the ongoing conflict in Syria was agreed on in meeting of the Joint Special Representative of the United Nations and the League of Arab States for the crisis in Syria, Lakhdar Brahimi, and the top foreign affairs officials of Russia and the United States.