7 December 2012
The United Nations human rights chief today voiced alarm at the rising tension and recent deaths and injuries during protests related to Egypt’s draft constitution, while also drawing attention to a number of problems with the text.

“The lack of inclusive participation of various actors in Egypt in the constitution-drafting process is a matter of major concern, and one of the main reasons for the disastrous situation that has been developing in Egypt over the past couple of weeks,” High Commissioner for Human Rights Navi Pillay said in a news release.

“This is the last thing Egypt needs during such a difficult period of transition, but I believe people are right to be very concerned – not just about the way the process has been short-circuited, but also about some of the elements included in, or missing from, the draft text.”

Seven people were reportedly killed and hundreds wounded this week in clashes between supporters and opponents of President Mohamed Morsi, and thousands of protesters are said to have taken to the streets again today.

Ms. Pillay welcomed Mr. Morsi’s call for dialogue on Thursday but regretted there was no significant progress on the core issues relating to the constitution, the draft text of which is due to be put to a referendum on 15 December.

“The haste with which the Constituent Assembly adopted the final text for presidential action, and many of the surrounding circumstances, have put into question the credibility of the process, and contributed to the chaos in Cairo and other cities,” she said, calling for urgent steps to restore confidence in the process, and in the new constitution.

The draft, she said, contained some important positive elements, such as the limitation of the presidency to two four-year terms and the inclusion of the right to establish associations and civil institutions.

“The draft constitution provides guarantees to some human rights,” said Ms. Pillay. “However, there are also some very worrying omissions and ambiguities, and in some areas the protections in it are even weaker than the 1971 Constitution it is supposed to replace.

“I am highly concerned, for example, by the absence in the current draft of any reference to the international human rights treaties which Egypt has ratified, and is bound to uphold. The 1971 Constitution, by contrast, stipulated the legal standing of these treaties.”

Egypt is a State Party to seven international human rights treaties, including those relating to eliminating discrimination against women, promoting civil and political rights, ensuring the rights of children, and prohibiting torture.

Ms. Pillay also regretted that the draft constitution, in many of its provisions, refers to legislation currently in force in the country which may already be at odds with international human rights norms.

In addition, while the text guarantees equality before the law in rights and duties with no discrimination, the High Commissioner noted that “it does not explicitly prohibit discrimination on the grounds of gender, sex, religion and origin,” while maintaining the language in the 1971 Constitution concerning Sharia Law as the primary source of legislation and jurisprudence.

“The draft constitution guarantees the freedom of faith, but only mentions the three monotheistic religions, raising concern for all other religious groups including resident minorities such as the Baha'i community,” she said. “This makes it less inclusive than the 1971 Constitution, and opens the door to breaches of Egypt’s obligation under international law to honour everyone’s right to freedom of thought, conscience and religion.”

While the freedom of press is guaranteed to an extent, limitations include respect of private life and national security. Censorship of the press is forbidden, except in times of war and when armed forces are mobilized. However, the role of the National Council of the Media in regulating the profession could be very problematic, Ms. Pillay noted.

She also voiced concern about Article 198, which prohibits the trial of civilians before military courts, but provides for an exception in relation to crimes committed against armed forces as defined by law.

“This Article appears to be in contradiction with international standards due to the wide interpretation of crimes under which civilians could be tried by military courts in existing legislation,” said Ms. Pillay.

Also of concern is an article that call for leaders of the defunct National Democratic Party to be banned for 10 years, which leads to the exclusion of far too broad a range of people from their political rights, and the absence of any explicit guarantee of the independence and mandate of the National Human Rights Institution in Egypt. 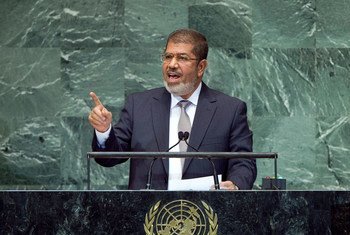