Nuclear plants near the region that was hit by a 7.3 magnitude earthquake off the eastern coast of Japan appear to be operating normally, the United Nations atomic energy agency said today, adding that no emergency measures have been put into place so far.

In a statement, a spokesperson for the International Atomic Energy Agency (IAEA) said it had been in contact with Japan’s Nuclear Regulation Authority (NRA) to collect information about the status of nuclear power plants that could be affected.

“Nuclear power plants in the region nearest to the epicentre of the earthquake have reported to NRA that they have detected no trouble and that no emergency measures have been activated,” said IAEA’s spokesperson, Gill Tudor.

The earthquake triggered a one metre sea level rise in some areas and prompted evacuations, but according to media reports, no deaths, injuries or serious damage have been noted. Media reports said the earthquake’s epicentre was about 245 kilometres south-east of the city of Kamiashi at a depth of about 36 kilometres.

Ms. Tudor said the IAEA has offered its good offices to Japan and reaffirmed its readiness to provide assistance if the Government should request it.

In March 2011, Japan was struck by an earthquake and tsunami that killed more than 20,000 people in the eastern part of the country. In addition to causing widespread destruction, the tsunami also slammed into the Fukushima Daiichi nuclear power station, located in Fukushima Prefecture, disabling cooling systems and leading to fuel meltdowns in three of the six units.

The accident, which was reported to be the worst nuclear accident since the 1986 Chernobyl disaster, shook the nuclear industry, regulators and governments; and weaknesses in the design and various oversights in the power station were later identified, which could have diminished the damage. Since then, the Japanese Government has significantly increased its efforts to improve its early warning systems and nuclear safety measures. 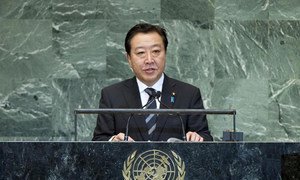 Recalling that a year and a half had gone by since the earthquake which struck his country last March, Prime Minister Yoshihiko Noda of Japan today told the United Nations General Assembly that his Government was determined to pass on lessons learned from the resulting disaster and make concrete contributions to nuclear safety.