6 December 2012
The head of the United Nations agency tasked with defending press freedom today voiced deep concern over the killing of both professional and citizen journalists in Syria.

“I am deeply concerned about the continued killings that have decimated the ranks of professional and citizen journalists in Syria in recent weeks,” said the Director-General of the UN Educational, Scientific and Cultural Organization (UNESCO), Irina Bokova.

“The killing of journalists and bloggers is not only a crime against individuals and a breach of their inalienable human right of freedom of expression. It is also a crime against society’s right to access information and engage in democratic debate,” Ms. Bokova added in a UNESCO news release.

Mr. Assaad, a retired journalist who continued working for government-run newspaper Tishreen was shot dead outside his home in the capital, Damascus, on 4 December, and Mr. Tawfiq Youssef, a Government television journalist, was killed on 21 November in a Damascus suburb, according to UNESCO.

Mr. Mahmoud was killed one day earlier while filming clashes in the north-eastern province of Al-Hasaka. Mr. Khalil, who was also the president of Ras Al-Ain’s Kurdish municipal council, was killed by a sniper during clashes on 19 November.

Mr. Al-Khalid, from Homs, is reported to have been executed by an armed group in Aleppo on 18 November and Mr. Kaake is said to have died under torture in the same city one day earlier.

Mr. Al-Zaher and Mr. Kerman are reported to have been killed by shell fire on 19 November and 16 November in Damascus and Aleppo, respectively.

UNESCO stated that these deaths bring to 40 the number of reporters and citizen journalists killed in Syria this year. 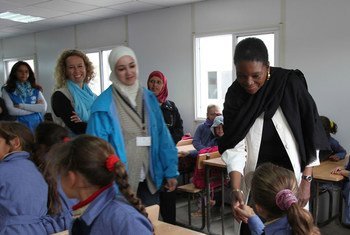 3 December 2012
New methods to reach and assist the Syrian population are required as the situation in the Middle Eastern country continues to deteriorate on a daily basis, a senior United Nations humanitarian official said today, adding that civilians are the ones paying the price of the ongoing conflict.