6 December 2012
The United Nations today launched a new initiative to support communities across Africa in adapting to the impacts of climate change which, if left unaddressed, could have major consequences for lives and livelihoods on the continent.

The United Nations today launched a new initiative to support communities across Africa in adapting to the impacts of climate change which, if left unaddressed, could have major consequences for lives and livelihoods on the continent.

The information portal known as the Africa Adaptation Knowledge Network (AAKNet), launched by the UN Environment Programme (UNEP), will serve as a hub for knowledge, research, successful initiatives and collaborative partnerships on climate change adaptation.

“It builds on ongoing efforts around the continent to mobilize existing knowledge and provide robust solutions to the major impact of climate change on lives and livelihoods in Africa,” the UN agency stated in a news release.

Disasters such as severe droughts in the Sahel in 2012 and the Horn of Africa in 2011, noted UNEP, have brought into sharp focus the serious impacts on water, land, soil and other resources linked to climate change on the continent, and the need to build resilience to such pressures.

Global warming is expected to pose serious challenges to sustainable development, particularly as most African economies depend on climate-sensitive sectors such as water, agriculture, fisheries, energy and tourism.

“Yet the region lacks the capacity and resources needed to face the challenges of climate change – a problem that could have major economic consequences,” stated UNEP.

It also seeks to build partnerships with governments, research bodies, non-governmental organizations and others, with the aim of supporting climate change response. To reach those directly affected by climate change, the AAKNet initiative will also conduct workshops with community organizations, farmers, and other groups, to share knowledge and practical advice.

The initiative comes as countries continue their negotiations at the UN Climate Change Conference in Doha, Qatar, hoping to reach agreements on issues such as the way forward on climate finance, a response to the widening emissions gap, and an extension of the Kyoto Protocol.

Under the 1997 Protocol, whose first commitment period expires at the end of 2012, 37 States – consisting of highly industrialized countries and countries undergoing the process of transition to a market economy – have legally binding emission limitation and reduction commitments.

Today at the conference, which brings together the 195 Parties to the UN Framework Convention on Climate Change, the parent treaty of the Kyoto Protocol, participants underlined their commitment to a range of priority actions, reviewed progress and pledged to re-double efforts to reduce short-lived climate pollutants (SLCPs).

This brings to almost 50 the number of partners in the Climate and Clean Air Coalition – a voluntary initiative aimed at maximizing the health, agricultural and climate benefits of swift action on SLCPs.

Fast action on black carbon and methane have the potential to slow a global temperature rise by up to 0.5 degrees Celsius by 2050, reduce air pollution-related deaths by as much as 2.4 million and crop losses by around 30 million tonnes annually, UNEP said in a news release.

Scientific assessments indicate that the near-term benefits in places like the Arctic and on glaciers in mountain regions could be even higher, it added.

The Coalition, which was launched initially by six founding countries and UNEP in February this year, is already acting on several fronts. Among other actions, it is supporting an initial group of 10 major cities, including Rio de Janeiro, Lagos, Stockholm, Accra and New York, to accelerate methane reductions from landfills and black carbon or ‘soot’ from burning wastes. 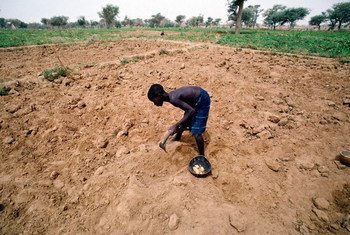 5 December 2011
Climate change is already having an impact in the livelihoods of millions of people in the Sahel and West Africa, according to a new United Nations study released today, which calls for governments to implement policies that will prevent competition for resources, conflict and forced migration in the region.