UN Photo/Mark Garten
Lakhdar Brahimi, Joint Special Representative of the UN and the League of Arab States for Syria.

6 December 2012
The urgent need to initiate a political process to help resolve the ongoing conflict in Syria was agreed on in meeting of the Joint Special Representative of the United Nations and the League of Arab States for the crisis in Syria, Lakhdar Brahimi, and the top foreign affairs officials of Russia and the United States.

“We have discussed… the situation in Syria and we have also talked a little bit about how we can work out, hopefully, a process that will get Syria back from the brink, to put together a peace process that will be based on Geneva [the Geneva communiqué],” Mr. Brahimi told reporters after his meeting with Russia’s Minister of Foreign Affairs, Sergey Lavrov, and the US Secretary of State, Hillary Clinton.

“We haven’t taken any sensational decisions but I think we have agreed that the situation is bad and we have agreed that we must continue to work together to see how we can find creative ways of bringing this problem under control and hopefully starting to solve it,” he added.

The trio met in the Irish capital of Dublin, at Mr. Brahimi’s request, on the margins of the 19th Ministerial Meeting of the Organization for Security and Co-operation in Europe.

The Geneva communiqué referred to by the Joint Special Representative lays out key steps in a process to end the violence in the Middle Eastern country, and was issued after a meeting in the Swiss city of the so-called Action Group for Syria in late June.

Mr. Brahimi has previously noted that many of the building blocks for a political process to end the Syrian crisis are already contained in the Geneva communiqué. Amongst other items, the document called for the establishment of a transitional governing body, with full executive powers and made up by members of the present Government and the opposition and other groups, as part of important agreed principles and guidelines for a Syrian-led political transition. 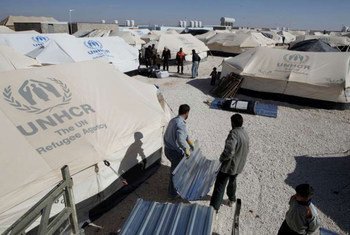 4 December 2012
A senior official with the United Nations refugee agency called today for safe passage for Syrians fleeing the mounting violence in their country, where “at least” 2.5 million civilians are in peril and in need of assistance.