The United Nations humanitarian chief today called on the Government of Myanmar to work with the world body and its partners to increase efforts to address the humanitarian issues that are causing continued instability in the country.

“The last year has seen remarkable changes within Myanmar but humanitarian needs continue and in some areas have intensified. As the country moves ahead on its reform process it needs to address some critical humanitarian issues,” the UN Under-Secretary-General for Humanitarian Affairs and Emergency Relief Coordinator, Valerie Amos, said in the Asian nation, while on a seven-day visit to the region that ends on Saturday.

“This will save lives, assist in the restoration of peace and stability in parts of the country where conflict persists and will enable longer term development work to continue,” she added in a news release from the UN Office for the Coordination of Humanitarian Affairs (OCHA), which she also heads.

The UN official is in Myanmar to assess the country’s humanitarian situation, including the impact of ongoing conflict in the northern states of Kachin and Shan, where some 75,000 people from have been forced from their homes since fighting began in June 2011 between Government troops and rebels.

The Under-Secretary-General is also looking at the effects of the recent inter-communal ethnic violence in the western state of Rakhine, where more than 115,000 people have been displaced and the community remains divided.

During a meeting with President Thein Sein, Ms. Amos commended him on his recent pledge to enact a range of measures, including pursuing a durable ceasefire in Kachin and addressing issues such as citizenship, resettlement, and reconciliation in Rakhine state.

“United Nations organizations and our partners want to support the Government in tackling these issues,” Ms. Amos said. “There are a number of areas where our interests for the well-being and welfare of the people of Myanmar connect.”

Earlier Thursday, the UN humanitarian chief visited Jan Mai Kawng camp outside Myitkyina, the capital of Kachin state, where some 700 internally displaced persons are housed. The camp is located in a Government-controlled area and it receives regular assistance from aid organizations.

Ms. Amos also expressed grave concern for people displaced in other parts of the state where the world body has no access.

“The UN has not been allowed access to provide badly needed assistance to some 39,000 people in areas outside the Government’s control since July 2012,” she said. “Local partners are providing food and other assistance but their stocks are depleted and with the winter months approaching, getting more supplies in is critical.”

Ms. Amos raised Kachin with the President and her concern about the lack of humanitarian access in some Government-controlled areas and in areas controlled by the political organisation known as the Kachin Independence Organization.

“We have substantial experience working in insecure environments. We are working in other places where the security situation is much worse,” Ms. Amos noted. “We hope the Government will give us permission to travel to these areas and provide the aid that is so desperately needed.” 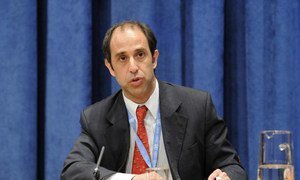 Myanmar: UN expert calls for underlying causes of tensions in Rakhine state to be addressed

Expressing concern about renewed deadly violence, a United Nations independent expert has called for the underlying causes of the tension and conflict between the Buddhist and Muslim communities in Myanmar's Rakhine state to be addressed as a priority.