Meeting with Iraqi leaders today, United Nations Secretary-General Ban Ki-moon raised concerns about political divisions in the country, while also reiterating his call for it and Kuwait to fully mend ties between them.

At a news conference with Iraqi Prime Minister Nuri al-Maliki, Mr. Ban referred to an ongoing political stalemate involving the country’s Shia, Sunni Muslim and ethnic Kurdish parities, saying the impasse was a “disservice to the people of Iraq, who look to their leaders to deliver a better future.”

He also touched on what he called “divergences” over disputed territories in the country’s north, where differences linked to oil and land rights between the Iraqi federal government and the autonomous Kurdistan Regional Government have surfaced.

“There is no alternative to peaceful coexistence within a united federal Iraq,” Mr. Ban said.

On the issue of Iraq’s relations with Kuwait – which Iraq under Saddam Hussein invaded in 1990 before a UN-endorsed international coalition forcibly ended the Iraqi occupation of the country – the UN chief called on the countries to “usher in a new era of cooperation,” as he did while on a visit to Kuwait on Wednesday.

He added that he had used his meetings with both al-Maliki and the Emir of Kuwait, Sabah Al-Ahmad Al-Jaber Al-Sabah, to ask that they “redouble their efforts” to resolve outstanding differences between the countries.

“This will greatly benefit the people of both countries in the long term,” Mr. Ban said, noting that outstanding obligations included a boundary demarcation issue, as well as compensation for farmers shifted to create an agreed no-man’s land on either side of the border.

Mr. Ban returned to the question of Iraq’s internal divisions in a meeting with the heads of Iraqi political blocs on Thursday.

“Above all, I worry that increased political polarization could stoke sectarian violence and reverse the precious security gains against terrorism in recent years,” Mr. Ban told the gathering.

“To guard against this, I urge all political leaders to engage in an inclusive dialogue to resolve their differences in the spirit of the Constitution,” he added, referring to the post-Saddam Constitution defining Iraq as a democratic, federal and parliamentary Islamic republic.

In his remarks to the political bloc leaders, Mr. Ban reinforced his call for national reconciliation for “all communities,” adding that, “there is no alternative to reaching a mutually agreeable understanding over the issues of wealth-sharing and disputed internal boundaries.”

He also pointed to provincial council elections in 2013, saying “credible elections will be crucial to consolidating the democratic transition.”

On that score, Mr. Ban highlighted what he called the “overdue elections in Kirkuk,” an oil-rich northern province. It did not take part in Iraq-wide provincial elections in 2009 because of ethnic disputes centred, according to reports, on a Kurd wish to be administered by the Kurdistan Region, and an Arab and Turkmen push for joint management of the province.

“I urge the communities there to forge consensus on a way forward,” Mr. Ban said as he pledged UN support for the election process.

The world body’s presence in the Middle Eastern nation includes the UN Assistance Mission for Iraq (UNAMI), which serves as a focal point for channelling advice to the Iraqi Government and people. Established as a political mission by the UN Security Council in 2003, UNAMI is mandated to help with advancing inclusive political dialogue and national reconciliation, as well as assisting in the electoral process, among other duties.

While Mr. Ban also used his address before the political blocs to praise Iraq for making “important progress” in strengthening its state institutions, he said women in the country were “still marginalized.”

The UN chief noted that quotas made it possible for women to make up one quarter of Iraq’s Council of Representatives, the country’s main elected body, before pointing out there was minimal female representation in other key posts.

“Iraqi women are bright and talented,” he said. “They should be empowered to engage in building the future of this great country.”

The issue of neighbouring Syria and the need for Iraq to keep its bordered open for people displaced by the ongoing violence there was among the topics covered in these meetings.

UN's Iraq-Kuwait mission promotes calm and should be maintained - report 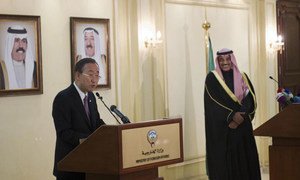 UN chief ‘encouraged’ by progress in relations between Kuwait and Iraq

During a visit to Kuwait, Secretary-General Ban Ki-moon today said he was encouraged by the country’s recent progress in relations with Iraq, adding that the two nations have a “historic” opportunity to begin a new era of cooperation.