6 December 2012
A major United Nations technology conference where States have gathered to discuss how to facilitate international information and communication services suffered a network outage –linked to criminal groups – to one of its websites on Wednesday, preventing participants from following deliberations and accessing texts online.

According to conference organizers, responsibility for the disruption has been claimed by cyber criminal groups, in response to claims that the World Conference on International Communications (WCIT-12), which is being held in Dubai, in the United Arab Emirates, is trying to restrict freedom online.

These claims have been repeatedly denied by the Conference’s organizing body, the International Telecommunications Union (ITU) – the UN agency’s head added that threats made against WCIT-12 by cyber criminal groups undermine the very same principles of freedom of expression and unfettered access to information that the gathering has been at pains to defend.

“It is ironic that the very people who claim to be fighting for a free Internet are preventing those around the world trying to follow the event online from getting access. Do they believe in one rule for them, and one for everyone else?” said ITU’s Secretary-General, Hamadoun Touré.

The hacking attack prevented delegates, members of civil society and the media from accessing some online working documents that were being considered by the meeting.

“However, a spirit of camaraderie prevailed, with those who had access to up-to-date online versions of the texts willingly sharing with other delegates in order to keep discussions moving forward,” ITU said in a news release.

The 11-day conference – which is slated to run until 14 December – brings an estimated 2,000 delegates from 193 nations together to review the current International Telecommunications Regulations (ITRs), which functions as the binding global treaty designed to facilitate international interconnection of information and communication services, as well as ensuring their efficiency and widespread public usefulness and availability.

Following the disruption, network traffic was redirected to a backup website hosted in another geographical region.

Up to 2,000 people per session are following the live and archived multilingual webcasts of the event, with an additional estimated Twitter exposure of more than 35 million people via the WCIT hash tags.

Because of its commitment to environmental responsibility, the Conference is largely paperless, with participants largely relying on online platforms to access updated versions of all texts in six different languages.

However, ITU stated that “while further technical measures have been put in place today to ensure the online system continues to function, the Conference can revert to paper processing if necessary, to ensure discussions proceed according to the tight timetable set for negotiation of the new treaty.” 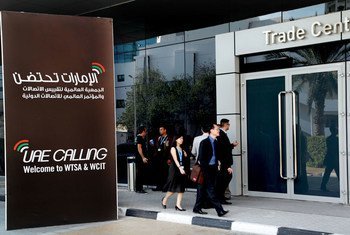 3 December 2012
The management of information and communication technology should be “transparent, democratic, and inclusive,” Secretary-General Ban Ki-moon said of a major meeting organized by the United Nations International Telecommunication Union (ITU).