5 December 2012
The security and humanitarian situation in the Kivu provinces in eastern Democratic Republic of the Congo (DRC) remains fragile, a United Nations spokesperson said today, adding that the world body is continuing to assist the country on both fronts.

The province of North Kivu has been the site of upheaval and a humanitarian crisis recently, with the occupation of its capital city, Goma, by the 23 March Movement (M23) armed group, composed of soldiers who mutinied in April from the DRC national army, known by the French acronym FARDC.

Monitored by peacekeepers from the UN Organization Stabilization Mission in the DRC (MONUSCO), M23 fighters withdrew from the city over the weekend, in line with requirements laid out in a communiqué issued by a regional group, the International Conference of the Great Lakes Region (ICGLR).

“In North Kivu, the withdrawal of the M23 rebel group has continued. The Congolese army is deploying back to Sake, west of Goma,” UN spokesperson Martin Nesirky told reporters at UN Headquarters in New York.

Mr. Nesirky said Congolese authorities also announced the re-opening of the airport in Goma, which will allow MONUSCO and humanitarian partners to immediately fly in relief supplies.

In addition, Radio Okapi, a UN-backed radio station which had its services suspended by national authorities, resumed its broadcasts yesterday in the capital, Kinshasa, and has been on air in North and South Kivu.

However, Mr. Nesirky warned that the humanitarian situation remains extremely worrying in North Kivu, where a camp hosting 30,000 people was recently looted by armed men. While there were no deaths, one non-governmental organization has treated 12 victims of rape, all of which occurred on the same night.

In the area of Minova, some 70 rapes have been recorded by health centres, according to an inter-agency assessment mission. All 70 survivors received treatment within 72 hours.

Mr. Nesirky added that food distributions continue and large-scale distributions of household items are planned in Goma and its surroundings, to the extent that security allows.

UN chief ‘encouraged’ by progress in relations between Kuwait and Iraq 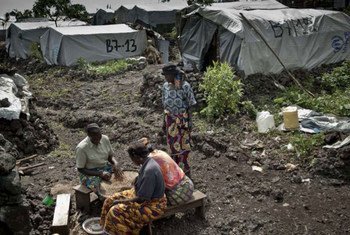 4 December 2012
Amid reports of volatility in the area, the United Nations refugee agency today said it is concerned about the security of displaced people in the eastern Democratic Republic of the Congo (DRC) after an attack on a camp outside of the provincial city of Goma over the weekend.