“While economic growth and regional integration bring many positives such as the increased mobility of goods, services, people and money, they also provide opportunities for transnational organized crime to expand, threaten human security and challenge the rule of law,” said the Executive Director of the UN Office on Drugs and Crime (UNODC), Yury Fedotov, during a visit to the country.

Mr. Fedotov stressed that in spite of its economic reforms, economic growth and efforts to combat corruption, Laos is at risk of trafficking because of its shared borders with Cambodia, China, Myanmar, Thailand and Viet Nam.

“Transnational organized criminal syndicates traffic in illicit drugs, children, women and men, counterfeit products and fake medicines. But they also play a role in illicit resource extraction including protected natural resources, timber, fish and other wildlife. These syndicates represent a threat to public health and to society’s well-being,” he added.

During his visit, Mr. Fedotov met with senior officials, including Prime Minister Thongsing Thammavong, and reiterated UNODC’s support for Government efforts to reduce illicit opium poppy cultivation, to increase food security, to develop sustainable livelihoods in former opium-growing areas, and to fight organized crime, corruption, terrorism, and the trafficking of people and sexual exploitation of minors.

He also visited a centre housing women and children who had been victimized by human trafficking, domestic violence and sexual exploitation, and commended police and prosecutors for focusing on victims and their human rights.

“We need more such shelters at a time when many of those in society are being victimized in this way,” he said.

Mr. Fedotov also urged support for Project Childhood, an initiative to combat the sexual exploitation of children – mainly in the travel and tourism sectors – within the Greater Mekong subregion. The project is currently active in Laos, Cambodia, Thailand and Viet Nam. UNODC is involved in the project, which focuses on prevention and protection, by strengthening law enforcement capacity to identify, arrest and prosecute travelling child sex offenders. 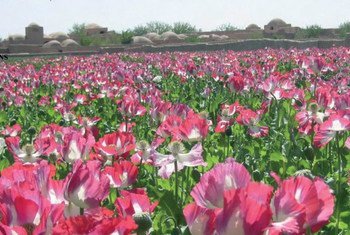 Despite significant eradication efforts, high opium prices led to an increase in poppy cultivation in Afghanistan this year, a joint report released today by the Government and the United Nations Office on Drugs and Crime (UNODC) has found.